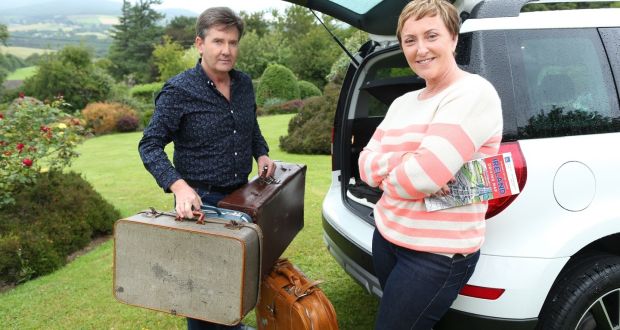 DANIEL AND MAJELLA LOOKING FOR A B&B AGAIN!

written by Stephen Maguire May 13, 2016
Facebook0Tweet0LinkedIn0Print0

Daniel and Majella getting ready for their road trip last year.

DANIEL and Majella’s B&B Road Trip is back for a second series – but they are moving from UTV to RTE.

Due on air later this year, the producers are calling on B&B owners to take part in the show, which follows Daniel O’Donnell and his wife as they travel around Ireland.

Speaking about the series Ray McCarthy, Commissioning Editor, RTÉ, said: “We’re delighted to have Daniel and Majella on board at RTÉ One.

“We’re huge fans of both of them and it’s a great series highlighting Ireland’s many unique and colourful tourism spots”.

One of the highlights from the last series was Roscommon woman Anne Sheerin who became an internet sensation following her emotional reaction to Daniel and Majella’s arrival to her B&B.

If you fancy welcoming Daniel and Majella into your B&B and showing them the delights of your local area, apply by emailing bnbroadtrip@gmail.com or calling Helen on 01 8641444.

Closing date for applications is Wednesday 18th May.

DANIEL AND MAJELLA LOOKING FOR A B&B AGAIN! was last modified: May 13th, 2016 by Stephen Maguire
Facebook0Tweet0LinkedIn0Print0
Tags:
B&Bdaniel o'donnelldonegalRTEUTV