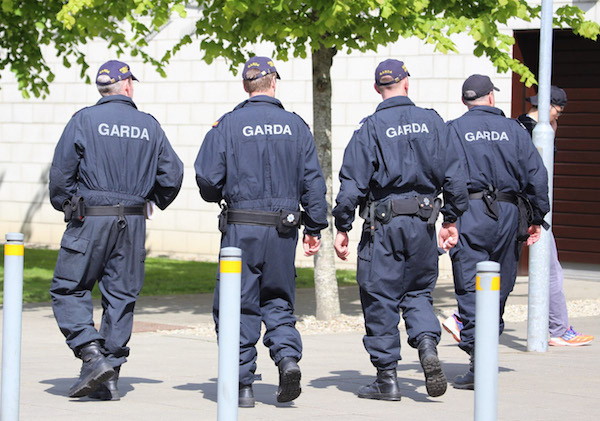 GARDAI CARRY OUT RAIDS ON EVE OF VISIT OF PRINCE CHARLES

written by Stephen Maguire May 24, 2016
Facebook0Tweet0LinkedIn0Print0

Gardai patrol at the LYIT in Letterkenny earlier this afternoon.

Gardai in Co Donegal have carried out a series of raids on the homes of suspected dissident republicans ahead of the visit of the Prince of Wales tomorrow.

A number of raids were carried out by officers from a number of different Garda divisions.

Up to 10 homes were searched and items removed by undercover Gardai.

However, although a number of known dissidents were questioned, no arrests were made.

A peaceful protest is expected to be held close to the Letterkenny Institute of Technology later tomorrow by those opposed to the visit.

A Facebook page entitled ‘No Warm Welcome For Charlie’ has been set up with more than 100 people saying they will attend the protest.

The Facebook event page says “Everyone welcome, bring your posters and lets show solidarity that we are not supporting this visit or wasting of tax-payers money. This will be a peaceful demonstration.”

However, it is unlikely that there will be any confrontation between the protesters and members of the visiting party.

A massive security operation has been in operation at three separate centres across Donegal including Magees Clothing in Donegal Town, the LYIT in Letterkenny and Glenveagh Castle.

Invited guests attending the functions will be subjected to scanners similar to airport security.

Hundreds of undercover and uniformed Gardai were yesterday patrolling the three centres where Prince Charles and his wife Camilla will visit.

Staff at all three centres had to receive security clearance in recent days.

Members of the British Royal family’s own security team including officers from M15 have met with Gardai top brass in recent days to plan the security operation.

GARDAI CARRY OUT RAIDS ON EVE OF VISIT OF PRINCE CHARLES was last modified: May 25th, 2016 by Stephen Maguire
Facebook0Tweet0LinkedIn0Print0
Tags:
donegalGardaiLYITpatrolsraids