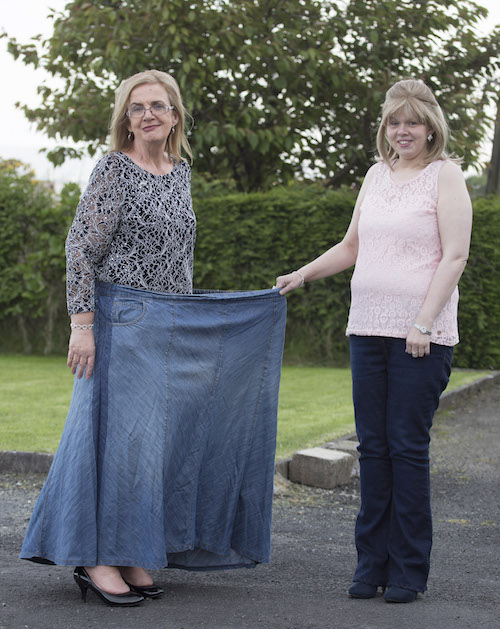 written by Stephen Maguire May 27, 2016
Facebook0Tweet0LinkedIn0Print0

Inspirational Geraldine Glenn who has lost 13st 11Ibs, holding one of her skirts with the help of her daughter, Carol, who has also lost 4st 7Ibs, which she was wearing just under 2 years ago . (North West Newspix)

A mum-of-two who has lost almost 14 stone has put her incredible weight loss down to cutting out takeaways and dancing to her favourite band!

Inspirational Geraldine Glenn is literally half the woman she was just two years ago.

Geraldine, from Quigley’s Point on the Inishowen Peninsula, said the weight just crept up on her after she had her two children and she never realised how heavy she was getting.

Now she says she has lost so much weight that people she has not seen for a while literally walk past her in the street.

Geraldine says following her favourite band The Indians has helped her speed up her weight loss and keep it off.

“We have been going to see them for years and I think eating more healthily combined with dancing the night away has helped me lose the weight.

“We’re going to see them this weekend and when we go to see them we dance from the start to the finish. There’s no point in going to see a band if you don’t dance and enjoy yourself,” she said. 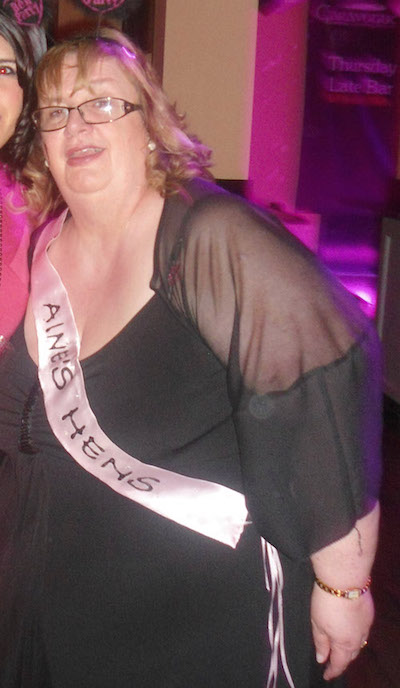 Geraldine in the days when she struggled with her weight. Pic by Northwest Newspix.

Geraldine said that although she was never a huge eater, she ate all the wrong foods and often ordered in takeaways as she juggled family life with husband Vincent, daughter Carol and son Brendan.

But after joining her local branch of Slimming World, Geraldine now snacks on fruit but still allows herself a small treat each night under the watchful eye of mentor Janice Tracey.

“But we’re all in it together and it gives you the help and encouragement to reach your goal.”

Geraldine is pictured in the skirt she wore to her first slimming class – which is a staggering size 32.

She is now a healthy size 14 and has been encouraged all the way by daughter Carol who has also lost a super four and a half stone.

The Donegal mum previously bought her large-sized clothing from online catalogues but now she can shop anywhere she chooses.

“It’s great that with the summer coming I have the comfort of knowing I can go into a clothes shops and something on the rail will fit me,” she said.

And she said her weight loss has helped her compete with husband Vincent.

“He has always been very active and never struggled with his weight so it’s great that we can do things together and I am not conscious of carrying all that weight anymore,” she added.

And modest Geraldine admits that although it’s nice to hear compliments form people, she is just delighted she has overcome her weight issues for herself.

“I would say to anyone interested in losing weight to go to Slimming World and give it a go. If I can do it, then anyone can,” she said.