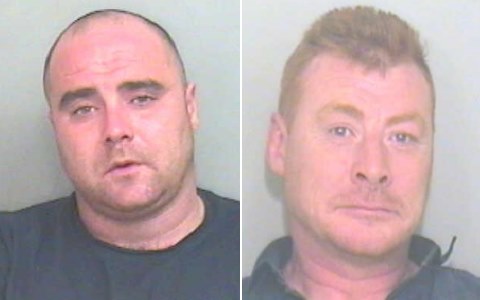 McGlinchey and his accomplice McLaughlin

A Donegal lorry driver has been jailed for people smuggling following the death of an Afghan man seeking asylum in the UK.

Meet Singh Kapoor, 40 died from a heart attack while travelling from Belgium with 34 others, including his family.

36-year-old Stephen McLaughlin, from Carndonagh was jailed for nine years and his accomplice Martin McGlinchey, 49, for eight years.

Both men denied conspiracy to facilitate illegal entry into the UK but were found guilty at Basildon Crown Court.

One man, Meet Singh Kapoor, was found dead inside the container

The container had arrived in Tilbury with 10 men, 10 women and 15 children on board from Zeebrugge.

Mclaughin supplied the lorry and allowed his shipping account to be used for the container’s journeys.

A third man, Taha Sharif, from High Cross Road, Tottenham, who was convicted of the same offence last year, and who will be sentenced later this month, organised the loading of the people into the container.

When they arrived in the UK, the 35 asylum seekers were treated for shock, exhaustion and dehydration.

Detective Chief Inspector Martin Pasmore, from Essex Police, welcomed the sentence.
He said: “Vulnerable people seeking help were treated in an appalling way at the hands of these greedy criminals, which prevented any prospect of medical help for Mr Kapoor.

“My thoughts remain very much with his wife, children, family and friends, and the other surviving asylum seekers who endured such distressing and shocking conditions.”