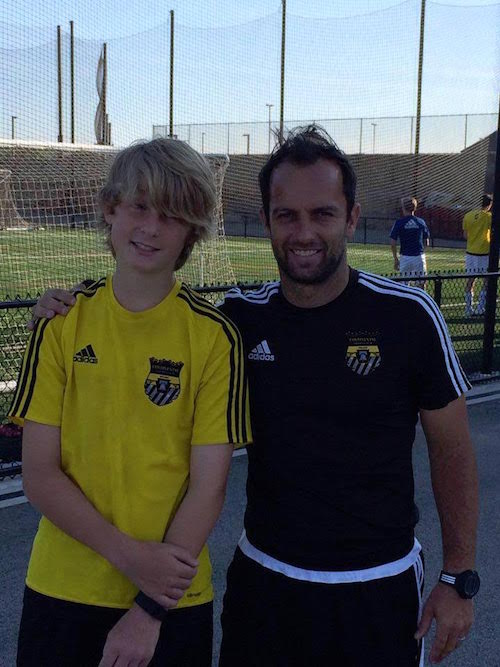 A young American-born defender with strong Finn Harps links will help get the ball rolling this summer when the Finn Harps Academy forges exciting transatlantic links with the Continental FC Academy in Philadelphia USA.

Trevor, who went to college in Pennsylvania, says the links between the two academies is an exciting development that will hopefully lead to opportunities for players and coaches in both.

“Our Academy at Finn Harps is about the development of our young players as individuals off the pitch as well as their development as players. I’m very hopeful that the links we forge with Continental FC will lead to exciting chances for players and coaches from both.

“We’re looking forward to welcoming Brian this summer and we hope he will have a fantastic experience when he is with our group. Hopefully in the future some of our young lads and coaches will get the chance to travel to Philadelphia to train with Continental.FC”

Sean McCafferty agreed that the links being forged are ones with amazing scope to further develop the young players as individuals.

“It will be great for Brian to experience what’s involved when you have to settle into a new environment with a new group of players. Like Finn Harps, our academy is aimed at developing technically gifted players, but also at developing them as individuals as well.

“The opportunity to travel, to meet new people and to see new possibilities in life will be a major benefit from this and I’m looking forward to working with Trevor and the Harps lads in developing the links between our academies over the coming years.”

Meanwhile Brian, who arrives in Ireland at the end of the month, says he is really looking forward to meeting up with the players and coaches in the Harps academy.
“I’ve been to Ireland a good few times before and I have met Trevor at the FAI summer camp in Raphoe when I was younger, but this will be different and I can’t wait to be part of it.”
Brian has already got some Harps connections though, his uncle Paddy McDaid has played for the club in the League of Ireland, while his cousin Conor Porter captained a Harps team that included Shay Given, to Foyle Cup victory a few years before he headed off on a soccer scholarship to Villanova University in Philadelphia.
“Our Academy is going from strength to strength each year and earlier this season our coaches and volunteers all participated in the Building Positive Clubs Programme piloted by Donegal Sports Partnership, not to mention the fact that we have former academy players back now working as volunteer coaches which is really fantastic.
We aim to make being part of the Finn Harps academy as enjoyable an experience as possible and hopefully the links we forge with Sean and Continental FC will open up new avenues for our young players and coaches to progress and develop in the future,” Trevor concluded.