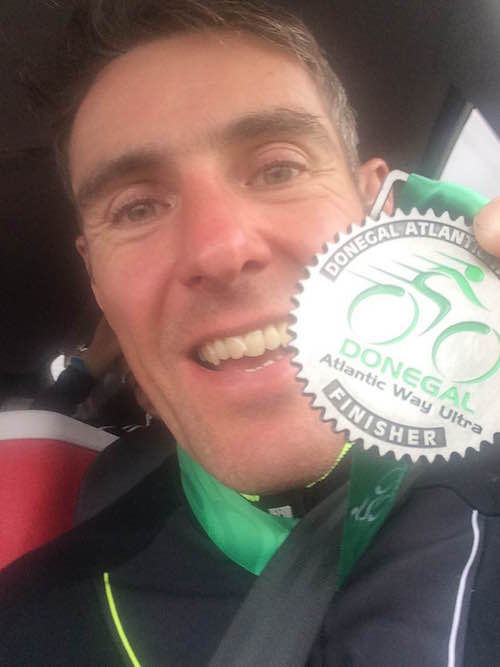 Donegal lay witness to the battle of battles in sport as the toughest endurance athletes to to the 555km Donegal Wild Atlantic Ultra race over the weekend.

It was a monster course, explained Jason Black.

“The course was relentless in its passion to break you down physically & mentally. Starting out Friday morning from Letterkenny at 10am I knew it was going to be a battle of a race with ex-professional rider Ronan McLaughlin from the Sean Kelly an post team & the world renowned endurance race cyclist and race across America finisher Joe Barr.

And one hell of a battle it was, with Joe Barr and Jason Black taking lumps out of each other through the Atlantic Drive, Horn Head and on into the night to the appropriately named Bloody Foreland.

Jason Black with his medal.

Jason said, “It was a monster course, savage savage hard and at times the pain was unbearable. I was feeling really strong after the 210kms coming out of Inishowen and with the dreaded climb up mamore gap firmly behind me it was onwards to Fanad head with the might of knockalla mountain, Atlantic Drive, Hornhead & Glengesh mountain. The Challange now was to push as hard as I could and still hold some reserve to finish.

“The proudest feeling was having my family billy, Laura ,Kate and sharon my wife as my support crew, as they handled my nutrition clothing & navigation their positive energy, motivation and passion was driving me on kilometre after kilometre.

“People all over were captivated with the challenge, tracking the race online they came out of their houses as the race passed, surprisingly even in the middle of the night to cheer us on, it was unbelievable & so uplifting.”

The course followed the wild Atlantic way and the views from sun set to sun rise were simply breath taking and a gentle reminder of the untouched beauty of Donegal coast line.

With 500kms done, news filtered through that the battle between Jason Black and Joe Barr which had been going on all day was now down to a mere 30 seconds.

Crossing the line back in Letterkenny after the epic 555kms, Ronan Mc Laughlin with an dominating ride took first place with the battle of the day for second place going to Jason black with 75seconds separating Joe Barr in 3rd.

14 solo competitors took on the Challenge along with six mixed teams with incredible performances and personal goals surpassed.

The professional organisation this weekend has lay down an encouraging strong platform for the ultra endurance race to attract further international athletes for next year as Donegal’s fast becoming a leading adventure destination playground.

Sheephaven divers get ahead of Storm Ciara...