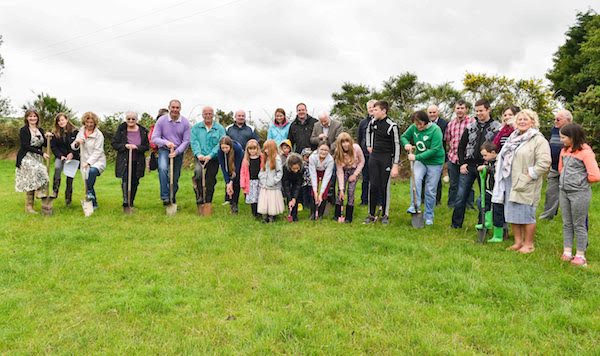 Committee and members of the Donegal SPCA, turning the sod at the new Animal Rehabilitation Centre site at Ballyare.

The first sod has been turned on the site of the new Animal Rehabilitation Centre on the outskirts of Letterkenny.

The ‘Arc’ centre, which will be located in Ballyare, will provide a centre in which Donegal’s many neglected and mistreated animals can be treated before being found a home.

The committee of Donegal Society for the Prevention of Cruelty to Animals were joined by friends and supporters of animal welfare from around the county for the historic occasion.

It is hoped that the centre will be opened in a year.

Chairperson of Donegal SPCA, Kathleen Murray, opened proceedings with a short speech outlining the vital role that the facility will play in the battle against animal cruelty in the county.

She also explained the role that the centre will play in educating the public about animal welfare and her hopes that the ‘Arc’ will be a great resource for the community as well as for many unfortunate animals. The turning of the first sod was done at the same time by all present.

Following the turning of the first sod, ISPCA inspector, Kevin McGinley, gave a short talk on the different kinds of cruelty and spoke of the often, very human, reasons behind cruelty.

A question and answer session concluded the event.

Representatives from MacGabhann Architects, designers of the building, and McMenamin Bros Building Contractors were also present.