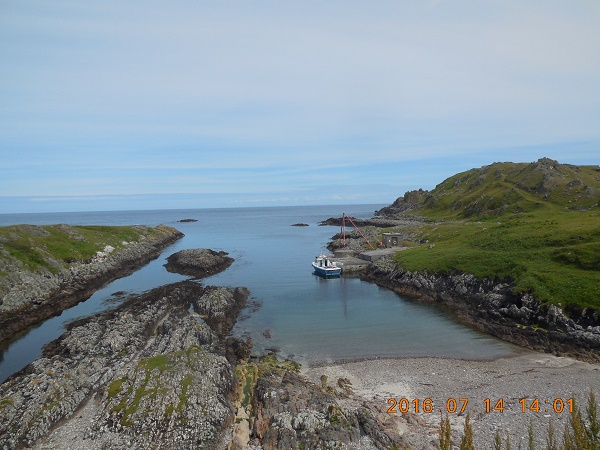 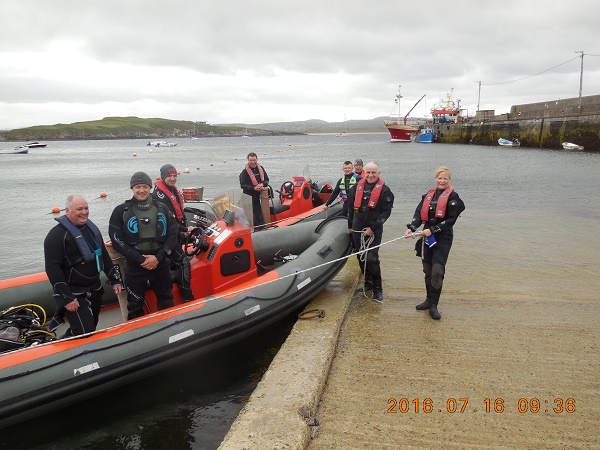 The Wednesday evening dive was led by Siobhan Coll to the cave and swim through at Mweelfin, which lies across Sheephaven Bay from Downing’s Harbour.

Mweefin is the headland just around the coast from Pat Mc Gee’s and has an excellent cave at a depth of less than 10 metres and nearby a swim-through that takes the diver along a gully and eventually out into a depth of 18 metres on the other side of the headland.

The dive was conducted in one stick thanks to the presence of Noel Brennan, who provided Dry Coxswain duties for the 30 minute dive, in good in-water visibility of at least 10 metres horizontally. 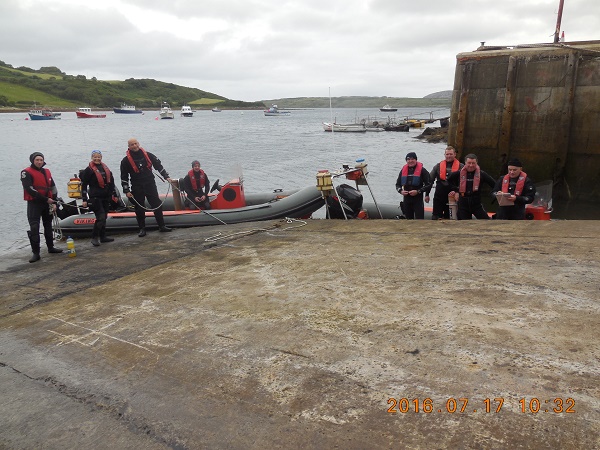 Sea conditions on the way over were quite poor, but in the shelter of the dive site they were quite calm and allowed for a relaxing evening dive.

The Saturday morning dive was still under the influence of a busy sea, with waves up to two metres that had been pushed ahead of stiff north-westerly breeze; consequently the decision was taken by the Dive Officer of the Day, Eddie Lynch from Donegal Bay SAC to seek the shelter of Horn Head.

Eddie was visiting Sheephaven SAC to conduct one of his three external dive leads as he prepares himself for his Leading Diver test later in the year.

Similar to Wednesday evening the dive itself was excellent, with the divers observing a range of marine species in abundant numbers, varying from sponges, hydroids and anemones to various shellfish, including Clams, Otter Shells and Razor Shells to Lobsters and Brown Crabs.

Dive times of over 40 minutes were recorded to a maximum depth of 25 metres, with in-water visibility of around 10 metres and a temperature of 15 degrees Celsius.

Sea conditions for Sunday mornings dive had not improved significantly so the divers went for shelter inside Melmore Head, where they conducted another 40 minute dive.

Once again similar to Saturday morning the dive was a two boat affair, conducted in two sticks and was just about as good as it gets when the more exposed sites are not accessable due to sea conditions. All-in- all a good week of diving, despite the poor sea conditions prevailing all week.

For one Sheephaven diver last week there was a unique opportunity to visit the most northerly point of the island of Ireland, when a guided trip to Inishtrahull left Bunagee Pier last Thursday. Inishtrahull has a connection with Sheephaven SAC in a number of ways, including its proximity to the dive sites of U 861 sunk as part of Operation Deadlight after WW II and the MV Argos Delos sunk 1960, as well as the destination for HMS Wasp before she ran aground on Tory Island in 1884, all wreck dive sites of note.

While Sheephaven divers have been on U 861 a number of times, they have never had the opportunity to set foot on the island, not least because it is protected bird sanctuary and access is limited as a consequence.

However under the guidance of Dessie Mc Callion and on board John Mc Laughlin’s charter boat a party of day trippers got the chance to visit this uninhabited island 10km north of Malin Head, landing at the picturesque Portmore pier. The island is the site of two lighthouses, the first was built in 1813 and subsequently replaced in 1958 by a modern construction, which itself was built on the site of the original Lloyds signal tower and Fog Horn Station.

The old lighthouse building remains are still very much evident, including the intricate stone and steel work that was a feature of their construction in the early part of the 19 th Century.

Bird life is so special on this island that it has the most highly protected status that the Wildlife Act can provide as the ground nesting birds breed on this site are particularly vulnerable and any predator threat that might harm them has to be prevented at all costs. Consequently any visits to the islands are with the consent of the National Parks and Wildlife Service.

The hours on the island went by in the blink of an eye, however the trip back was also memorable as well, when the visitors had a thrill of meeting a Basking Shark and quickly after that a pod of Dolphins.

Inishtrahull is not untouched by human hand but it is entirely unspoiled and it has a peace and spiritual calm that will remain in the visitor’s memories for a very long time indeed.