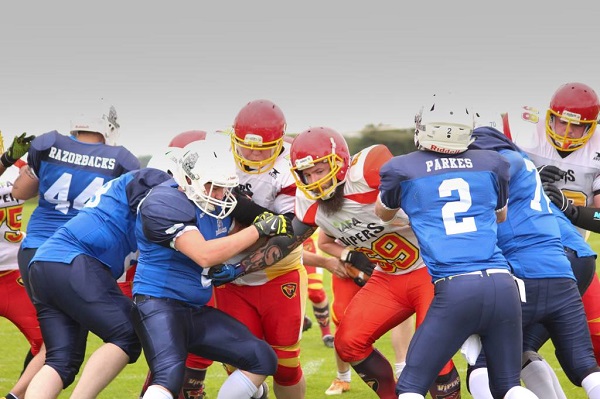 Donegal Derry Vipers on a roll with six wins in a row!

In the last game of their regular season The Donegal Derry Vipers knew the stakes were high. Sitting top of the division, just ahead of The Wexford Eagles, both on 5-0, The Vipers knew that any let up in performance could see The Eagles overtake them for top spot.

The Vipers will take on The Eagles in the IAFL2 Bowl Game this coming Sunday and with a win for both the teams it would set up the most exciting Bowl game the division had ever seen… with both teams reaching The Bowl unbeaten. Only 14 in game points separated the two and whilst The Eagles travelled to Galway to take on The Warriors, The Vipers headed to Belfast to take on The Razorbacks in the last game of the season.

Confidence was high and having already beaten The Razorbacks on the opening game of the season 27-0 The Vipers set about dismantling the Belfast men from kick off. Having received the ball an early Vipers drive was stunted resulting in a punt. 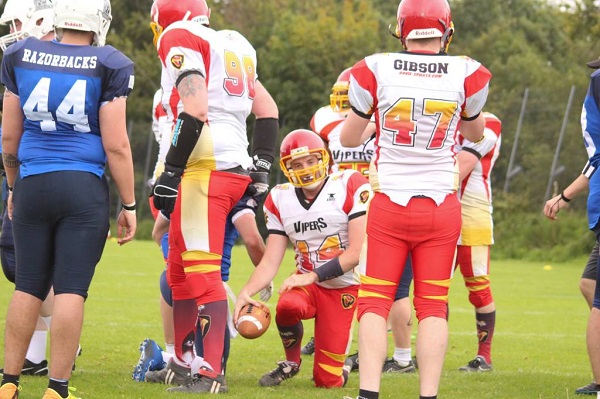 The Razorbacks suffered the same fate and the two opening drives of the game resulted in a stale mate. The Vipers received the ball for their second drive and within seconds were ahead. With the ball spotted at their 7 yard line QB Danny Mullan found his Wide-receiver Ryan brolly and with a quick turn of pace Brolly ran in for the opening score with a 93 yard TD. 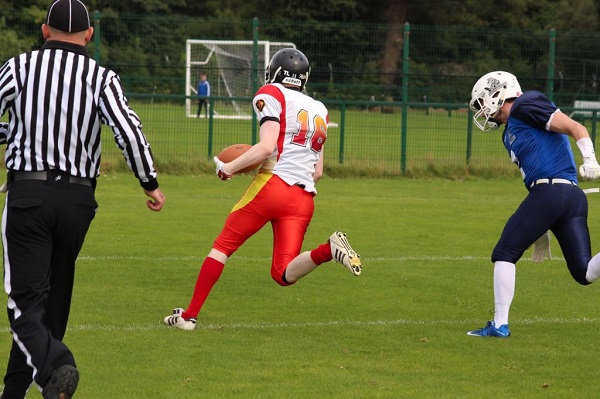 Brolly on his way to make a touch down 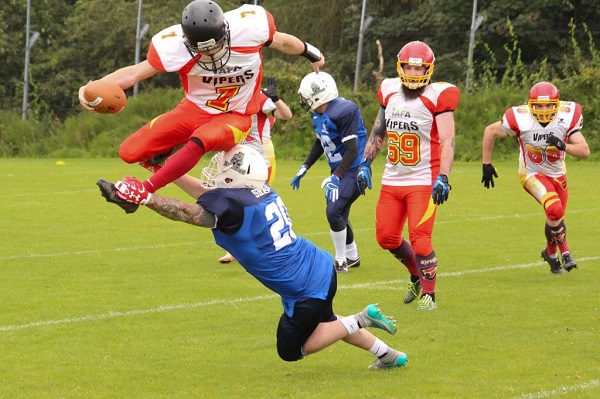 It was a combination that would bear fruit twice more for the Red & Gold as the Vipers scored 3 TDs in the first half. The rock solid Vipers defense would not be moved and with huge tackles coming from Corey McKenna and Ronan o’Connor deep in the second the Vipers went into half time Vipers 21-0 Razorbacks.

The Vipers now had a 5 touchdown lead in the league standings over The Wexford Eagles and with no news coming from Galway they decided to continue their onslaught upon The Razorbacks. The Belfast men received the Kick-off in the 2nd half and had hoped to reduce The Vipers lead but the door was slammed in their face.

The Vipers defense, who have conceded only 12 points all season decided that that was already too much and an Interception from Line-backer Kyle McAneny and big hits by Safety Stephen Henderson led the Vipers to their 4th Shut-Out of the season in 6 games. 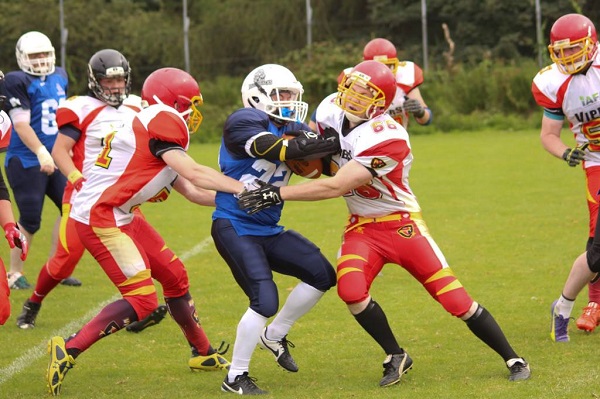 The 3rd quarter continued in the same thread as the previous 2 and QB Mullan was unlucky to not score himself, landing just millimetres short of the EndZone before losing his helmet in the tussle. League rules forced Mullan off for 1 play and as QB Nic Young joined the action there was only ever going to be 1 result. 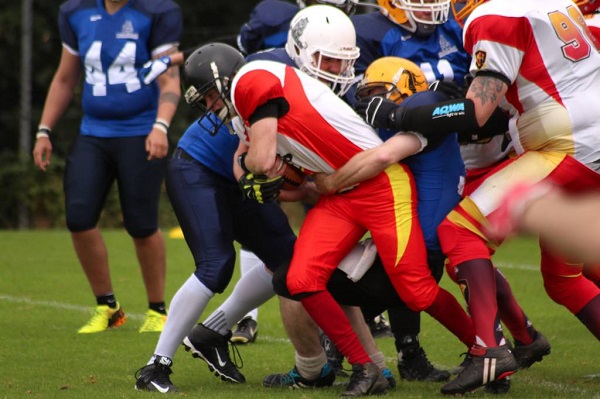 Mullan drives for the end-zone

A trademark ‘Sneak’ by Young on his first play of the game send The Vipers into a 28-0 lead as Gary Melly sent his 4th PAT over the bar in what would be an almost flawless performance by the phenomenal kicker. 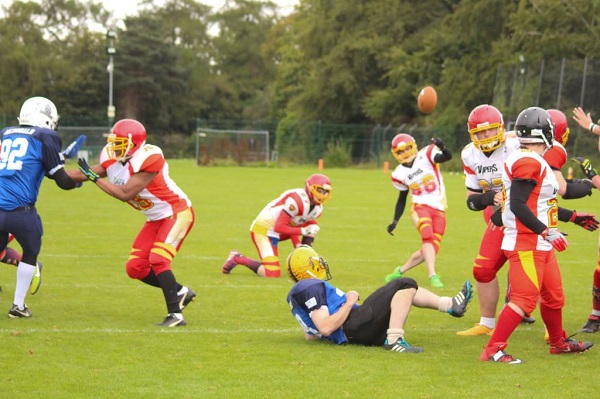 The Vipers defense continued to smash through The Razorbacks line and after some excellent work by Line-backer Niall Lyons and the entire Vipers D they gained another defensive score with a safety, adding another 2 points to the board, moving into a 30-0 lead early in the 4th qtr. 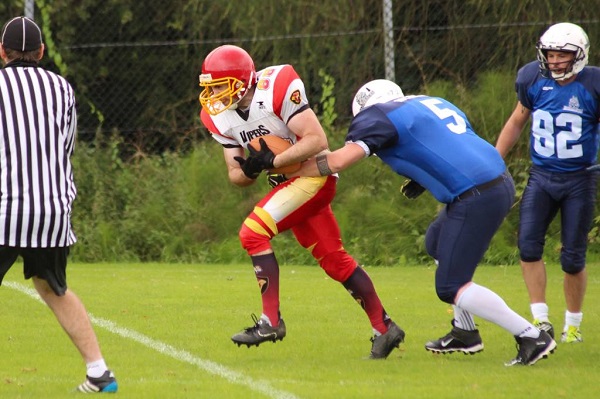 Before the quarter and game had finished Corner Coilin McGinley Intercepted a stray Razorbacks pass and as he grasped the ball and rand to the EndZone was certain he has scored. Upon review the Game officials rules his foot out of bounds just inches from the goal line. The call itself was controversial but the offense entered the field and only had 1 thing on their mind… another touchdown. QB Nic Young again added the points himself. 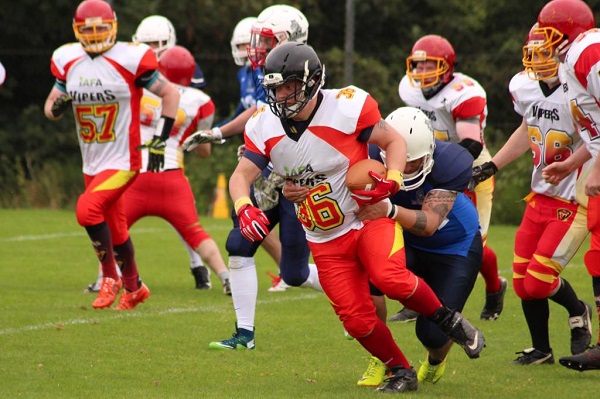 The Black Swan intercepts the ball

As news of a result finally came through from Galway there were joyous scenes amongst The Vipers ranks. Their Bowl Game opponents, The Wexford Eagles had a narrow victory over The Galway Warriors and with the game ending Eagles 13 – 0 Warriors, The Vipers were confirmed as the number 1 ranked team in the division and ended their regular season undefeated and with both the highest ranked Offense and Defense in IAFL2, amassing 192 points scored and only 12 conceded (including 4 shut-outs)

The Vipers travel to Westsmantown in Dublin this Sunday 28th August to take on The Wexford Eagles in the IAFL2 Bowl game to decide the championship and it is not to be missed.