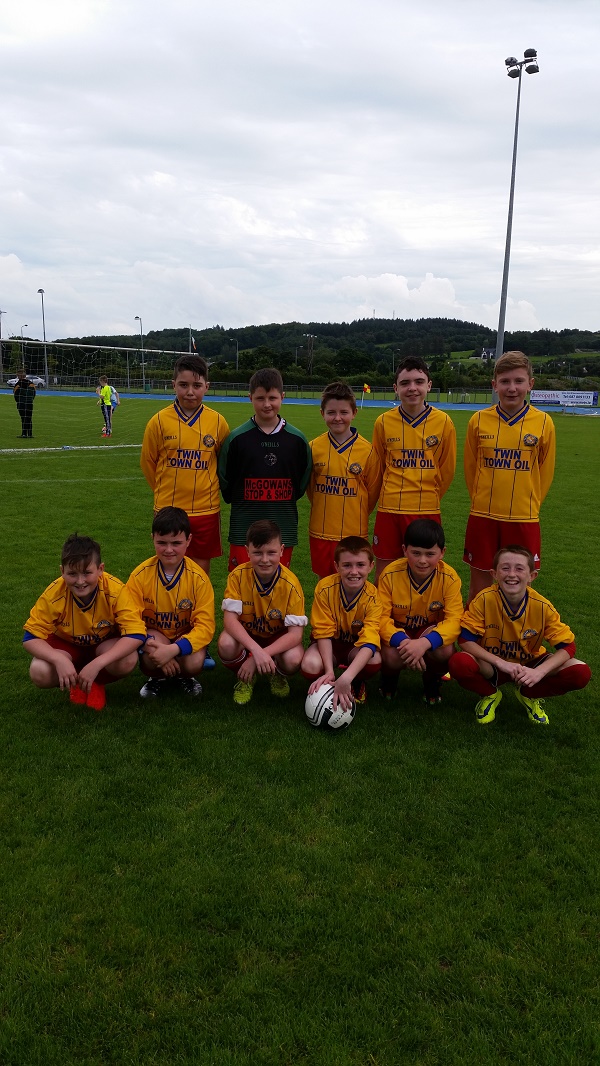 CAPPRY COLTS U12s
In what was a bumper weekend for Derby matches against Ballybofey United teams the Colts took to the pitch knowing a win would complete the route and claim 4 wins out of 4 for Cappry.

The Cappry Colts grabbed a late win on Saturday evening for their 1st win of the season. The 1st half was very entertaining with chances at both ends, but failed to produce a goal. Niall Ryan scored twice early in the 2nd half to put Cappry 2 up.

The young Ballybofey side came right back into the match with two quick goals from Cahir Brady Devenny and Bryan Irwin to set up a storming last 5 minutes. Eoin McGonagle scored in stoppage time for Cappry Colts to seal a 3-2 victory. Match Referee John Coyle.

CAPPRY LOTTO
The numbers drawn in the Cappry lotto were 4, 7, 16, 19.
There was no jackpot winner.
The winner of the lucky €50 ticket was Niall Patton, Castlefin.
Next weeks jackpot is €5850.
Remember if you’re not in, you can’t win.

CAPPRY ROVERS RESERVES
Cappry Rovers played host to Castlefin Celtic reserves on Saturday in their opening game of the reserve league. Things unfortunately didn’t go Capprys way and ended up on the wrong side of a 5-1 defeat. Petie Lafferty scored Capprys only goal.
Next Saturday they travel to Moyle View Park to play Milford Utd Reserves in what will be their 1st home match of the season. They secured a scoreless draw against Glenea in their 1st game.

CAPPRY ROVERS U16’s
Cappry entertained our neighbours Ballybofey Utd on Saturday morning in Cappry Park. Cappry started this game well and pressed for an early goal but couldn’t find a way through the Ballybofey defence. They came close in the 14th minute when Joel Bradley Walsh’s effort from 35 yards went just past the post.

Cappry kept the pressure on and got their reward in the 22nd minute when Joel Bradley Walsh found the top corner with a fine strike from 25 yards from a Jamie Keegan cross. Cappry should of doubled their lead in the 24th minute when Oisin Gallen found Karl Doherty with a fine pass but his effort was saved by the Ballybofey keeper.

Capprys defence was well on top with Sean O’Donnell and Kyle O’Meara dealing with any of their attacks. In 30th minute Joel Bradley Walsh made it 2-0 with another fine strike from outside the box. Cappry kept the pressure on in the 2nd half and with Oisin Gallen controlling the game in midfield they home side really should of added more goals but Jack Marley saw his effort go over the bar and Oisin Gallen had a shot blocked following a cut back from Conor Doherty.

To their credit Ballybofey never gave up but just found the Cappry team to strong for them on the day. Two team performances.

CAPPRY ROVERS U14s
Capprys under 14’s were the 2nd Cappry team to play their Ballybofey counterparts on Saturday and followed where the under 16’s had left off and gained their 2nd win of the season when they defeated Ballybofey 3-1 with Cody Laverty, Kyle Leeper and Daniel Gordon scoring the Cappry goals. This was another great result for the lads following on from their great victory last week.

CAPPRY ROVERS U12s
The Cappry U12’s were the next to pit their wits against the blue of our neighbours. The final score was 1-0 to Cappry with Luke McGlynn scoring the winner. This was a game in which Cappry dominated from start to finish with Oran Bonar in the Ballybofey United Wanderers goal getting credit for keeping the score respectful.

Capprys defence where on top form and restricted Ballybofey to 2 long range efforts while Cappry created 24 scoring opportunities of their own. Half which were well saved and the other half going narrowly wide. Team performance from Cappry and Oran Bonar standing out for Ballybofey.