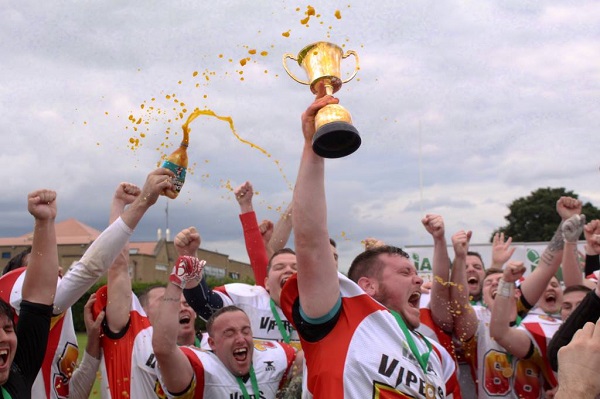 In what was touted to be the closest IAFL2 final ever and with both teams meeting with an unblemished record of 6-0 it was always expected to go down to the wire… and it did exactly that.

With 26 seconds of play left, the Vipers made a game-winning touchdown!

The two teams squared off in Westsmantown Youth RFC in Dublin, in the prestige game in IAFL2, having dispatched the other teams in the division all season. It was the perfect final and it was much debated as to who would be victorious.

The Vipers opened the game well and after a strong Vipers drive which utilised its Running-Backs Derm Brown and Cathal Curran the Vipers scored first. A 20 yard pass from QB Daniel Mullan to Wide Receiver Ryan Brolly set the tone for what would be the most fiercely fought game in IAFL2 history. (Vipers 6 – 0 Eagles)

The Eagles fought back almost immediate when Craig Broome opened The Eagles scoring with a TD and with the converted kick by Terry Carey The Eagles were 1 point ahead. Talented young QB Sam Doran then went on a mazy run and scored again for the Wexford men. Careys PAT was converted (Vipers 6 – 14 Eagles)

In a game that would see the lead change hands several time The Vipers fought back and with another terrific combination from QB Mullan and WR Brolly, the Vipers made it a one point game.

The two teams had matched each other blow for blow and both defenses had their moments. It was a brutal game that saw tough tackling Vipers Line-backers, Niall Lyons and Kyle McAneny, attended to by medical staff before patching themselves up and returning to the field. The Vipers lost the impressive back field paring of Derm Brown and Cathal Curran during the half and with injuries on both sides, the game was turning into a war.

Huge tackles by both teams including outstanding stops by Paddy Maguire, Eamonn Quinn and Corey McKenna for The Vipers saw the game tighten up as both defensive outfits worked tremendously hard to stop both the pass and the run game. But before the half ended there would be two more scores. FB Liam McLaughlin ran in a TD from 1 yard out to put the Eagles up by 8, which was closely followed by a Vipers TD from QB Mullan who ran it in just before the half ended. (Vipers 19 – 21 Eagles)

Half time was filled with tension as both teams joined the sidelines. A rousing speech from the Head Coach Jason Brock and the injured RB Curran settled nerves for The Vipers as they prepared to go again. The Vipers defense came out swinging and stopped The Eagles quickly with some excellent work and key tackles from Pete Farrell, Chris Moran and Richard Meenan.

The Vipers offense had the ball again and with the strong running power of Tight-Ends Chris Tinney and Thomas Comiskey The Vipers marched up the field. Centre Barry o’Kane set the pace for the Red & Gold and flanked by his Offensive linemen allowed QB Mullan to play his game. Mullan ran in his 2nd TD of the game and The Vipers regained the lead as Kicker Gary Mellys PAT put The Vipers up by 5 (Vipers 26 – 21 Eagles)

The game was close as both teams bedded in for the most of the 3rd and 4th quarter. A missed FG by The Eagles and a fumble recovery by Vipers defensive Lineman David Holden meant that with just 3 mins left on the clock The Vipers were in the driving seat. But The Eagles had other ideas.

After marching down the field, a 3 yard pass by Eagles QB Sam Doran saw Darren Greene catch the ball and send The Eagles sideline wild. Kicker Carey caught a play action pass from Doran for a 2 point conversion and with just 2 mins left on the clock The Vipers were down by 3. (Vipers 26 – 29 Eagles)

As the Red & Gold offense entered the field the tension was audible. Having never been behind in a game all season they were now 3 points down with less and 2 minutes to go against a team who, also had never lost a game. If they could get within field goal range they could tie the game and send it into Over-Time but a touchdown would surely seal the win.

A short drive with some intelligent plays to the sideline saw The Vipers reach FG range with around 50 secs on the clock, the clock continued to count down as The Vipers offensive huddle broke for 1 last time this season and as the offensive line held back a defensive onslaught Mullan was able to launch the ball to Brolly and in double coverage the wide receiver leaped in the air to catch the ball in The Eagles EndZone.

Melly again scored the PAT and with just 20 seconds left the Vipers took the lead. The clock ran down and as the Eagles received the ball from Kick off the whistle blew.