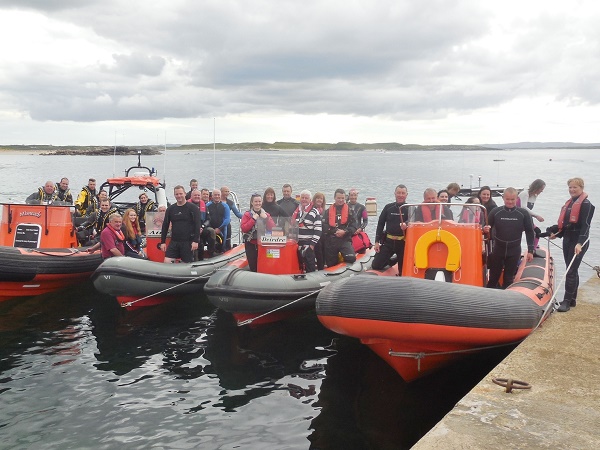 In a change from previous years when the divers swam from Burtonport to Arranmore this year they swam from Gola Island to the mainland at Magheragallon near Bunbeg in near perfect sea and weather conditions.

With Gola and Magheragallon bathed in late August sunshine and little or no wind to upset the serenity of the location the swim was idyllic. Additionally the area is loaded with history, particularly as Gola was the home of two of the crew of the Asgard, namely Patrick Mc Ginley and Charles Duggan, when Erskine Childers ran guns for the Irish Volunteers into Howth in July 2014.

Sheephaven SAC last visited Gola in 2007 when the divers swam from Mageragallon to the island and were hosted on site by one of the home owners. Now with the establishment of a regular ferry service many more of the houses on the island have been reopened and they looked very pretty in the sun.

The club had 21 divers in the water and they completed the 2km passage in just under an hour, enjoying crystal clear waters, which allowed them to see the wonderful Eelgrass and kelp park that populates the seabed at this location.

Amongst the divers there were some who choose to swim rather than snorkel the course, Maureen Gallagher, Caroline Mc Gee and Bernie Gallagher, all of who just recently were awarded their club diver accreditation and now have open water swimming added to their list of growing achievements.

As in previous years the accompanying boat support was vital in ensuring onsite safety and in addition to the clubs own boats helmed by Brendan Proctor and Joe Neely Atlantic Composites also provided a boat.

Atlantic Composites build bespoke RIBs for a range of customers including maritime enforcement agencies and this particular vessel, helmed by Timmy Boyle was powered by two 115 HP Suzuki outboards, which gave it a remarkable turn of speed as she delivered the divers to Gola pier.

Also standing watch over the divers was the Bunbeg Coastguard boat Misneach and crew under the helm of Joe Curran and she is spectacularly fast, powered by two 225HP Yamaha outboards, clearly out pacing anything in the bay.

The divers were dropped off on Gola pier and under the guidance of local boatman Danny O Donnell a course was set to Mageragallon that took the best effect of the tide flooding towards Bunbeg.

After everyone got safely ashore and Hugo had conducted the mandatory debrief at the pier all involved were hosted by Peppers Diner in Bunbeg to a super meal, during which Hugo presented all the divers and supporters with their complementary 2016 Fin Swim hat.

However this was not the end of the day’s activities, rather just a bit of a diversion to the final destination, a stay over on Arranmore, this time led by Joe Neely.

Trips away are a major feature of Sheephaven SAC and once again a night in Arranmore comes with the highest possible recommendation and remains a firm favourite destination for the divers involved, a fitting end to a wonderful day in the water.