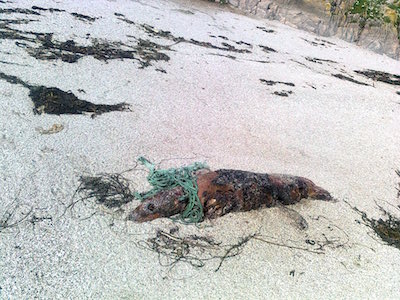 This is the evidence that marine litter is literally killing off some of Donegal’s stunning wildlife.

A shocked county council worker came across this gruesome scene in Inishowen earlier this week.

It shows what was once a healthy seal dead on a beach covered in the remains of a fishing net.

Marine litter continues to be a global concern affecting the marine and coastal environment.

The man said he decided to share the pictures to let others know how dangerous marine litter can be.

The man said “Last week I came upon the corpse of a seal which had died due to fisheries based waste on a Donegal beach.

“I have seen photos from around the world on the effect marine litter can have on our environment but when I saw this at home the reality of it was shocking” said the member of staff who prefers to remain anonymous.

“I just wanted to share these images to raise awareness of the issue”.

Marine litter currently poses a dire, vast and growing threat to our environment.

Most marine litter consists of material that degrades slowly, if at all, so a continuous input of large quantities of these items results in a gradual build-up in the marine and coastal environment.

This negative trend has been confirmed by a number of studies throughout the world, clearly indicating that the situation with regard to marine litter is continuously getting worse.

The council spokesman added “Every year, millions and millions of tons of litter end up in our seas, turning it into the world’s biggest landfill and thus posing environmental, economic, health and aesthetic problems. We need to tackle this problem by raising awareness of the dreadful harm that this waste is causing.”