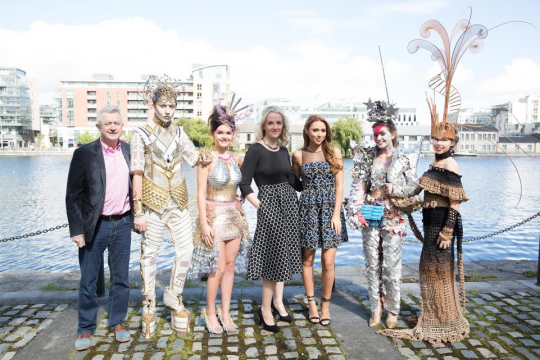 Ireland’s premiere recycled fashion competition, Bank of Ireland Junk Kouture is back for its seventh year but with the added star-studded line-up of ex-Voice of Ireland coach and Saturday’s singer, Una Healy.

X-Factor judge Louis Walsh is returning to the judging panel for the third time to bring his expertise from the industry to the 3Arena next April. Scoil Mhuire, Buncrana student Mariusz Malon, who was last year’s northern regional winner launched the 2017 competition with the new judges in Dublin last week. Mariusz’ design ‘Anthropocene’ was made from Anti slip plastic, scrap metals, and glass.

Secondary school students from north, south, east and west are invited to take part in the biggest event of its kind in the country. Bank of Ireland Junk Kouture encourages young people to design and create works of fashion art from recyclable materials, igniting their creativity and increasing their environmental consciousness.

Today we want to encourage students to get started creating and designing their Bank of Ireland Junk Kouture outfit, ahead of the entry date which is open between 9th Jan 2017 – 27th Jan 2017 www.junkkouture.com

Sara Ryan of Bank of Ireland Junk Kouture spoke of their excitement to have new judge Una Healy alongside Louis Walsh involved; “With entries becoming more impressive each year we are really looking forward to seeing the talent that applies for the 2017 competition. We are delighted that Una is joining the team. She is a fantastic role model for young people. Her expertise as a popstar, TV personality and love of fashion, makes her the perfect addition to our team. We welcome Louis Walsh’s return to the panel, his valuable judging experience and insight in the entertainment industry is priceless”.

Speaking at the launch Laura Lynch, Head of Youth Banking at Bank of Ireland said ‘As the bank that supports young people both at a local and national level with a suite of relevant and exciting dedicated youth initiatives, we are delighted to bring our second level students Bank of Ireland Junk Kouture for the 4th year.

“The competition continues to grow and evolve and we are so proud to be part of what has become such a major event for secondary school students across the country. Since 2012 Bank of Ireland has worked closely with the Junk Kouture team to create an experience that is unparalleled for students who have the opportunity to unleash their creative potential through design and performance. Every year we are simply blown away by the level of talent and dedication that goes into creating such unique, breathtaking designs and we’re really looking forward to seeing what this year will bring.’

The competition is open to secondary school students from Southern or Northern Ireland and can be made up of up to three people per team. 2016 saw a record number of applicants with over 1,000 entries for the regional finals having to be whittled down to just 80 for the grand final in the 3Arena.