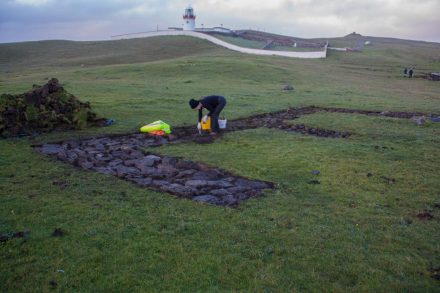 The community of Dunkineely are continuing to carry out restoration works on an EIRE sign that was erected at St John’s Point during World War II in order to help Allied Forces.

The excavation of the sign has been undertaken by a group of community volunteers who aim to make it a tourist destination.

During World War II Local Defence Forces were designated at lookout points around the Donegal coastline to monitor air and sea activity.

The post at St John’s Point was manned on a 24-hour basis.

However, at the suggestion of the American Ambassador in Dublin, massive signs spelling out EIRE to be erected around the country in order to help Allied forces flying above to establish where exactly they were.

Once they completed that, the decision was then made to number the EIRE signs, so the aircraft could determine exactly where they were when flying in Irish airspace.

Eight-three were made around Ireland, with twelve being created around Donegal, adjacent to the EIRE sign at St John’s Point was designated with the number 70, and the excavation on the two signs began on September 1st.

A spokesman for the project said he’s been delighted with the response from the local community.

“The work on the EIRE Sign and Navigational Number is going extremely well, the heavy work is over as we have removed all the grass from both of the signs.

“We are now removing the soil from in between the stones using trowels.

“We have had the help of over a dozen volunteers so far and we gratefully accept anybody else’s help.

“Our restoration work has attracted the interest of locals and visitors alike, as there’s so much history attached to it.

“It was remarkable how well intact the signs were, we need to replace a few stones, but there’s no major alterations needed to repair the signs.

“We’re hoping to get some drone footage to highlight the size of the signs, and what Allied aircraft would’ve seen when flying over the Donegal coastline.”