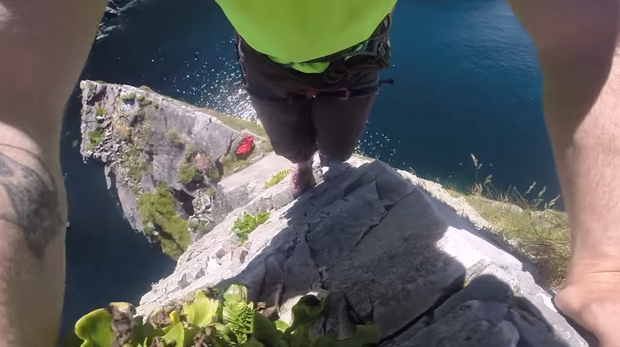 Donegal has featured in an article declared the ultimate Irish Bucket List, which lists thirty things you must do in Ireland before you die!

The article which was published in The Irish Independent and was compiled by Pól Ó Conghaile, Nicola Brady and Yvonne Gordon – who picked 30 amazing experiences for their Irish Bucket List.

The spectacular Slieve League cliffs and the awesome Berg Sea Stack in Glencolmcille feature in the comprehensive top 30 places to see before you die.

Speaking about Slieve League, the writer says, “Admiring sea cliffs is one thing. Experiencing the adrenalin rush of towering over a sheer drop on a cliff edge is quite another – and you’ll get that at the aptly named One Man’s Path at Slieve League, which is just two-feet wide in parts.

” The cliffs, rising nearly 2,000 feet from the Atlantic, are some of the highest in Europe.

On reviewing The Berg Stack, Pól Ó Conghaile writes, “New frontiers are hard come by in travel. So when an email lands telling you of a place fewer people have visited than the moon, you take note.

“Ireland’s sea stacks are among the least-visited nooks in the land, and more than 100 of them sprout from the sea off Donegal.

“I drove to the edge of the earth to meet the man behind that email (Ian Miller of Unique Ascent), and he took me on a nerve-jangling taster up Berg Stack, near Glencolmbcille. There was zero signal on my phone, but I never felt more connected.”