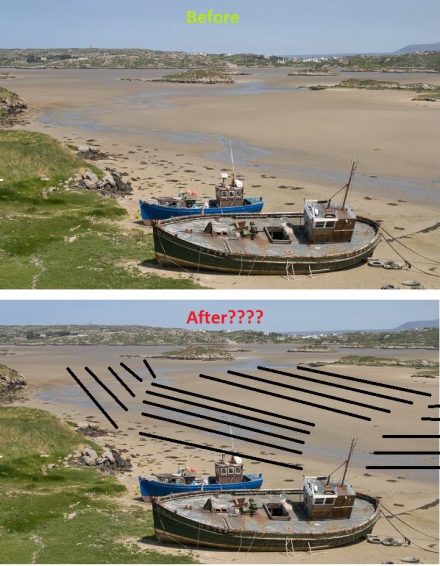 A massive crowd turned out at a public meeting last night – which was called in light of the Minister for Agriculture, Food and Marine, Michael Creed’s decision to give the go ahead for an Oyster Farm on Cruit Island.

Locals were furious at the Minister’s decision to allow an Oyster Farm to be erected on the stunning strand at Cruit Island.

Those opposed to the project, believe it would destroy the unspoiled beauty of the area and completely ‘desecrate’ Cruit Island.

It is believed an Italian businesswoman submitted an application to create an Oyster Farm at the site in 2011.

However, it was only last week that Minister Michael Creed gave the green light for an Oyster Farm project to go ahead at the site.

TD Pat ‘The Cope’ Gallagher released a statement in which he revealed that he had spoken to the minister and informed those opposed to the project to make submissions outlining their reasons as to why they were objecting to the Oyster Farm.

An emergency meeting was held at The Viking House Hotel last night, and a huge crowd turned up in support of the local efforts to block the project.

Cruit Island posted the following on their social media timeline on Facebook.

“An amazing turnout in the Viking House last night as the local community rallied around our efforts to halt a plan to develop oyster beds …at our beautiful strand at Cruit Island.

“Thank you to all who turned up to show their support.

“Next step is for everyone – from wherever in the world you may be – to make submissions to the Minister for Agriculture, Food and the Marine (Michael Creed) outlining their concerns and objections around the proposed project before 17th Oct deadline.

“Failure to lodge a submission before this date could eliminate the possibility to appeal any decision that we may not have hoped for.

“We will provide further detail on how to draft your submissions and where to direct them to but for now let’s keep up the momentum and keep the pressure on Government by spreading the word to friends far and near.

“Thank you to all who have got involved thus far – let’s keep up the fight.”