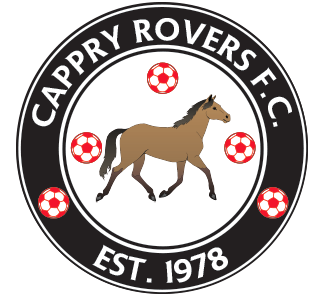 Cappry Rovers hold out for win against Keadue Rovers

The numbers drawn in the Cappry lotto were 3, 6, 10, 16.
There was no jackpot winner.
The winner of the lucky €50 ticket was Johnny McGrath, Blue Cedars.
Next weeks jackpot is €6150.
Remember if you’re not in, you can’t win.

Cappry Rovers were the victors in an entertaining game played in fine sunny conditions at Central Park on Sunday which leaves Keadue pointless after four games.

It was the perfect start for the home side when after three minutes Hugh Moy made a run down the left wing and was there to meet a good ball into the box before slotting home.

Cappry though weren’t long in getting back into things and after eight minutes Ciaran Sharkey pulled off a good save and two minutes later they had a half chance. Cappry should’ve been level on 22 minutes when Ronan McHugh put his effort wide when clean through. Keadue were made to sit back and absorb the pressure coming from the away team and on 31 minutes, were deservedly level when Paddy McNulty tapped in at the far post.

However despite having little possession by that stage Keadue retook the lead on 33 minutes when, following a good run by Jack O’Brien, the ball was played through to Conor Greene and he made no mistake placing it to the back of the net.

Keadue then had a good spell when both Chris Greene with a header and Conor Greene with a shot from close in were both denied in the final ten minutes of the first half.

The away side were level on 64 minutes when Calvin Bradley equalised with a right foot effort from close range. A few minutes later Keadue came close to retaking the lead when David Ward’s cross was met with two efforts from Ryan Greene and Donal Rodgers, both saved by the keeper.

Cappry kept up the pressure and Ronan McHugh made it three on 75 minutes when a run up the right caused a mix up in the Keadue defence and he tapped it in close to the line.

Keadue battled away in the last fifteen but despite good pressing they didn’t create any real chances and Cappry held out for a deserved win.

Best for Keadue were Hugh Moy and Conor Greene while best for Cappry were Calvin Bradley and Ronan McHugh.

The home side came into this game full of confidence after an impressive 4-0 win last week at home to Glenree. They were unlucky not to go one up early on through Michael Bowring whose effort was narrowly wide, Erne pressed the ball well from the off and attacked with intent.

Their pressure paid off before the half hour mark with Malcolm O’Reilly winning a penalty for a heavy tackle on the edge of the box. Packie Hill stepped up, after missing last week’s game through injury, to bury the ball past the keeper and put Erne in front.

It was 2-0 before the break, a run down the wing from Luke Toland and a great delivery to the back post for O’Reilly to head home. Karl O’Brien in the Wanderers goal had little to do in the first half with Cappry struggling to create chances.

The second half was just under way when O’Reilly teed up Hill to make it 3-0. Just after the hour a great through ball from Nicky Sheerin put O’Reilly through for his second of the day and Wanderers’ fourth.

Cappry won a penalty at the end but O’Brien comfortably saved what was the last kick of the game. A good team effort from a depleted Cappry side with Malcolm O’Reilly putting in a man of the match performance with two goals and an assist.

Cappry Rovers were back in National Cup action at the weekend when they travelled to Carrickboyle in Gweedore to play Gweedore Utd. Cappry put in another good performance and won the match 5-2 with Joel Bradley Walsh grabbing a hat trick with Evan McBride getting the other two goals.

Cappry Rovers entertained Lagan Harps in Cappry Park on Thursday evening last in a battle of the top two in the league. In what was a very tight game, Cappry got the only goal of the game through Kieran Thompson. This brings them on to 21 points with 7 wins from 7.

Facing an older and physically bigger team our boys started strong in the tackle and with a fast tempo to frustrate a technically solid opposition.

After weathering an early storm, Cappry settled well and some neat passing and movement between Eoghan Stewart and Keelan Browne yielded some space and a well struck Brown goal.

Ballyraine equalised but fierce tackling by the combative Conor Lynch and captain Ronan Gallagher and the rearguard three of Johnny Griffin, Kian Gallagher and Tim Scanlon kept Cappry solid at the back.

The introduction of all 7 substitutes who travelled brought fresh legs to the team with Shane McBride outstanding with his battling qualities, and a stunning last minute tackle by Darragh Porter to see the game end 3-3.

Easily the best team performance of the year as the boys supported each other to the final whistle. Thanks to Ballyraine for a keenly contested and sporting game.

Our U12’s were also back in National Cup action at the weekend when they travelled to Milford for what was a real belter of a game. Although Cappry ran out 4-0 winners, Milford were excellent and caused Cappry plenty of problems. Cappry were glad to get the breaks that they did and are through to the next round. Luke McGlynn, Josh McMenamin, Shaun Ward and Mark Mbuli were on target for Cappry.

The Colts had a good victory in Convoy at the weekend with conditions ideal. The first half was fairly even with Charlie Griffin, Darragh Carroll and Ronan Callaghan starting well for the Colts.

The best chance of the half went to Convoy on the stroke of halftime when their striker shot narrowly wide with only keeper Shea Doherty to beat.

The Colts started the 2nd half really well with Sean Lyons and Shaun Ryan making some great runs.

The breakthrough came 12 minutes into the 2nd half when Eoin McGonagle crossed into the box for Niall Ryan to slot home to put the Colts 1 up.

The 2nd goal came eight minutes from time when Odhran Quigley Doherty put in a terrific corner for Niall Marley to head home from 6 yards.

However 4 minutes from time Convoy scored from a corner of their own when Shea McDermott headed home from close range to set up a nervy finish for the Colts. Niall Ryan sealed the win in the last minute with a well placed shot into the top corner.

Well done to both teams on a very sporting contest and match referee Marty Quinn.

Cappry Crusaders welcomed the Ballybofey Cubs to Cappry Park this evening (Monday). Ballybofey shaded the 1st half and were unlucky enough not to have scored after creating a couple of good chances. With Ballybofey packing their defence, Cappry struggled to get any clear opportunities to score. 0-0 at halftime.

Cappry came back out in the 2nd half and really took the game to Ballybofey and penned them back in their own half for most of the 2nd half. It was clear that it was going to take something special to win the game and that moment came from Ballybofey’s Sean Brady Devenney when he unleashed a superb lob from close to the halfway line which found its way to the back of the net, De Gea would have struggled to keep it out. This proved to be the winner although I don’t think anyone would have argued had the game ended in a draw, it was a really entertaining game.

Well done to both sets of players and match referee John Coyle.

Cappry held a blitz against Castlefin on Friday evening past and all four teams put in fantastic performances and they continue to improve all the time. After witnessing some of the games I can easily say that the future is bright. Well done to all the boys and girls from both clubs who played.