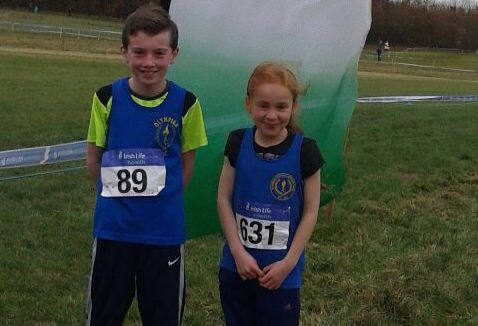 Olympian YAC’s contested the All Ireland Cross Country Championships at the National Sports Campus, Abbotstown, Dublin on Sunday past.

With two athletes, Boyd Russell and Nuala Bose, representing their club and county, pitted themselves against the best runners in the country in their first ever Cross Country race at an All Ireland level.

It was always going to be tough race for all involved but both athletes equipped themselves more than adequately and certainly relished the challenge.

Boyd Russell, competing in an age group above himself, showed great guts and determination to finish in an extremely impressive 22nd place overall.

What was even more impressive was that Boyd was also the 2nd counter for the Donegal county team that came 3rd overall, hence securing himself his first and a well deserved Bronze All-Ireland Cross Country Championships medal! A fantastic achievement to top off a wonderful cross country season for him so far.

Nuala Bose, as always competed with great heart and determination. Nuala, also competed in an age group above herself and finished a very creditable 116 out of massive field of 166.

Both athletes should be very proud of their achievements as all at the club certainly are ! Well done again guys! All that hard training is paying off so keep up the great work!

It is hard to believe that it has been a full year since the passing of our late and great club leader Paddy O’ Donnell.

Paddy had been a stalwart of athletics within Derry for the past 35 years. He coached many many athletes to Ulster, N.Ireland, All Ireland and International honours and was in our eyes the most talented coach that Derry and Ireland has, and will ever likely see.

We know this because Paddy devoted his life to volunteering in athletics, and not just coaching or officiating, but nurturing and truly and genuinely caring that every individual not only developed as athletes, but more importantly as people as well. We miss him as “Mr Athletics”, the best coach in the land. But we miss him even more as just Paddy. Always singing, always joking. He was a true gentleman who touched the hearts of many people, and we are all the more richer for it.