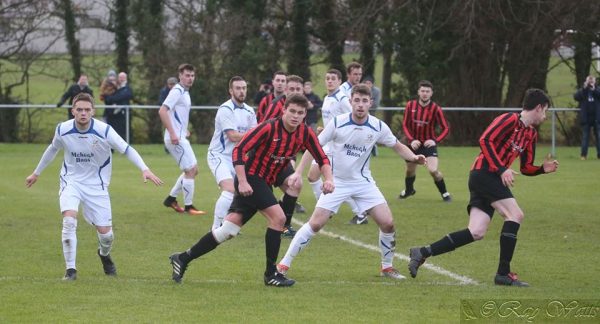 Away day blues: Defeat for all Donegal sides in FAI Junior Cup

ALL FOUR Donegal teams lost out in the FAI Junior Cup fifth round yesterday.

Donegal League teams Drumoghill FC and Kildrum Tigers made their exits and were joined in defeat by Inishowen sides Glengad United and Greencastle FC.

All four were away from home and defeat means that Donegal’s involvement in the competition is over for this season.

Glengad reached the quarter-finals of the Junior Cup last season, when they lost to Pike Rovers, but Shane Byrne’s team will have to concentrate on domestic matters in Inishowen now after a loss to Crumlin United yesterday.

The game was scoreless at half-time, but 16-year-old Kelvin Rogers put Crumlin in front.

Before Glengad – two-in-a-row Inishowen League champions – could shake that goal from their system, Ian Touhy added a second and Dave Bracken’s third gave Robbie Keane’s former club a passage into the next round.

Greencastle FC were in this stage of the competition for the first time ever, but Pat McLaughlin’s side lost 3-1 against Rush Athletic in north county Dublin. Action from the game is pictured above

Donegal League champions Drumoghill made the long trip to Cork, but were beaten 3-0 by Grattan United. Goals by JP O’Sullivan and Greg Morrissey put Grattan 2-0 up and there was no way back for Drumoghill, as Garry Coughlan struck a third for the home side.

Kildrum Tigers were at Abbeyfeale United in south Limerick, but the St Johnston men lost 5-0 against the Limerick Desmond League side. Thomas Smith’s hat-trick and goals by Paudie Smith and Packie O’Connor had Abbeyfeale 5-0 up at the break and Kildrum were left to rue some poor defending.

Away day blues: Defeat for all Donegal sides in FAI Junior Cup was last modified: December 4th, 2016 by Chris McNulty