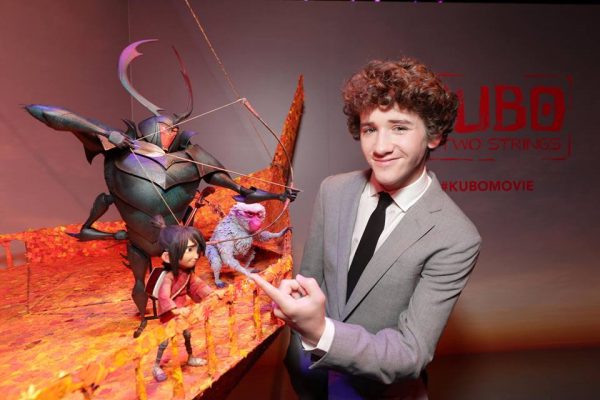 Young Donegal actor Art Parkinson’s pride in Kubo and the Two Strings won’t be dulled after the movie missed out on taking a Golden Globe award last night – there are many more chances for him to pick up prizes.

Art, (15) who is from Moville, voices the lead character in the acclaimed action-adventure which counts Hollywood stars Charlize Theron and Matthew McConaughey among its cast.

Kubo and the Two Strings was nominated for the Best Animated Motion Picture award alongside My Life as a Zucchini, Moana and Sing. Zootopia took the overall prize at the sparkling Golden Globes award ceremony in Beverly Hills last night.

Art is most proud of the films’ achievement and success, telling the Irish Film and Television Network last week: “I’m very proud and honoured to be a part of a project that has been so successful and touched so many people. I’m now really looking forward to award season and hopefully it will do well as the whole team at Laika has worked so hard through the art that is stop-motion animation over the five year period it took to make this project.

Art is most notable around the world for his role as Rickon Stark in the hugely successful Game of Thrones series on Sky Atlantic. To many locals, he’s a firm supporter of the Irish language and his school, Gaelcholaiste Chineal Eoghain in Buncrana.

There is a lot of Oscar buzz around Kubo and the Two Strings, which is being noted for its quality animation, powerful performances and universal appeal. Oscar nominations are announced at the end of the month. The epic tale directed by Travis Knight sees a one-eyed boy in Japan with the gift of telling fantastical stories embarking on a mystical quest to discover his family’s magical legacy.

Art has been individually nominated for an Annie Award, which is part of the International Animated Film Association in the US. His role as Kubo sees him up for an award for Outstanding Achievement for Voice Acting in an Animated Feature Production. The ceremony takes place in February.

Kubo was the winner of more Best Animated Film awards than any other film in 2016.

Well done Art, and good luck throughout the awards season.