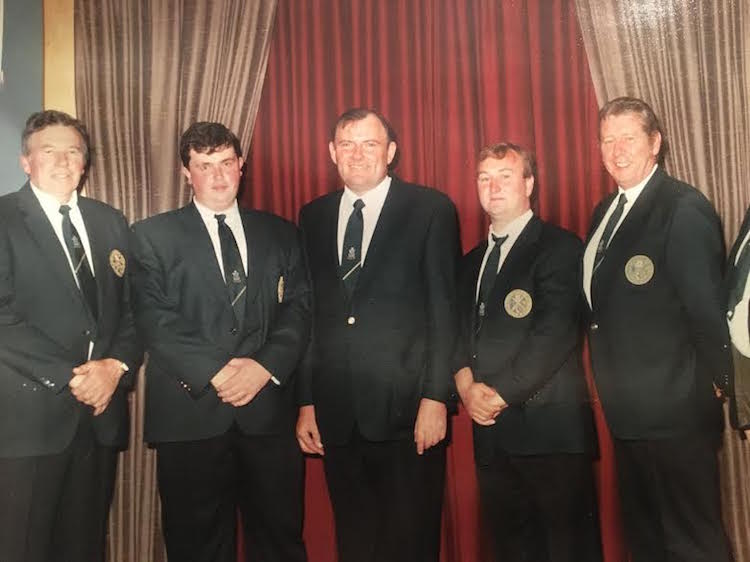 Ballybofey man John Campbell is to be honoured with the Donegal Sports Stars prestigious Hall of Fame award at the end of the month.

Campbell has been involved in Irish Clay Pigeon Shooting since 1975 and has made a huge contribution to the sport accumulating an outstanding list of achievements.

The now 80-year-old was the Overall Donegal Sports Star Award winner in 1982 and in total he is a ten-time winner of the Clay Pigeon category.

On five world teams, taking him to Australia, New Zealand, South Africa, Europe and the USA and ten European teams, he won gold and silver in France at the Europeans with the gold in the Three-Man team and the silver in the Overall.

John who hails from Glenfin was the first Irishman to break 100 Possible at the Grand American in Ohio, a feat he repeated for four years.

It all began for John in the mid 70s when he was working for John McCrossan, a builder from Letterkenny, and a clay pigeon shooter.

“He was coming up here regularly. He said I should start shooting. “He came here one day to the office and he had a new gun with him. He put it down and said: ‘You buy that.’ I bought the gun.”

He says shooting is a 100% mental game and the least little thing can put you off. “You have to be fully focused to be top. And the gun size is very important,” he said.

John Campbell holds the distinction of being the first man in the British Isles to fashion the adjustable gun stock .

“You have to go to the basics. You have to have a gun that fits you like a shoe. You can’t catch any gun and shoot it. Because you have to shoot where you are looking. I used to set up these guns and made stock adjustments. It was a big thing. Men had guns and the stocks didn’t fit them and they did not understand anything about them.

“That the first thing – the gun and the gun fit.

The way you stand is important. It’s like golf, you have to stand in the proper position. You have to be versatile. There are five stations where you stand. They are three yards apart going round in a semi-circle and your foot positioning changes every time you move from number one to five,” he said.

He says that Manorcunningham man Jim Doherty who was the Overall Donegal Sports Star Award winner in January is Ireland’s top shooter now.

“I was the only man who made the International Team up until Jim Doherty. I took Jim to his first 100 Bird competition. He is a ‘number one’ man,” he said.

He has brought many shooters into the game and given them tuition.

A long-time contributor to Field and Stream, an American shooting, hunting, fishing magazine, John Campbell’s ‘On the Trapline by J Campbell was a valuable contribution to education in the sport.’

A shoulder accident means that John Campbell is less involved in the sport now but he still takes part in smaller shoots. On Friday nights he goes to Aghyaran to shoot where at least twenty people from all over Donegal and Tyrone meet to participate.

He is married to Agnes and has six children, John (deceased), Mary (deceased), Collette, Brendan, Peter and Ciaran. His son Brendan was honoured at the Donegal Sports Star Awards in 1988.

John will receive his award at the 41st annual Donegal Sports Star Awards presentation function, which takes place in the Mount Errigal Hotel on Friday the 27th of January.