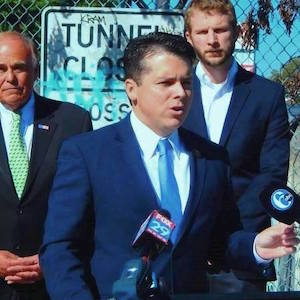 A US Congressman whose family hail from Donegal has lashed American President Donald Trump’s immigration ban.

Congressman Brendan Boyle’s family left from Glencolmcille to make their home in the US but return home regularly.

But yesterday Mr Boyle spoke out against the travel ban.

“As the proud son of a father who emigrated to this country from Ireland, I took my position on the President’s recent Executive Order to the floor of the House of Representatives today.

“Simply put, this is not who we are. Not as individuals, not as families, and surely not as a nation.”

In November 2015, Brendan, whose father Frank hails from Glencolmcille, became the only member of Congress with an Irish-born parent after he was elected to the House of Representatives in last year’s US mid-term elections.

In addition to this, Brendan’s brother, Kevin Boyle, is a member of Pennsylvania’s House of Representatives where the two had previously served together, becoming the first set of brothers to ever serve simultaneously in the House in its 300 year history.