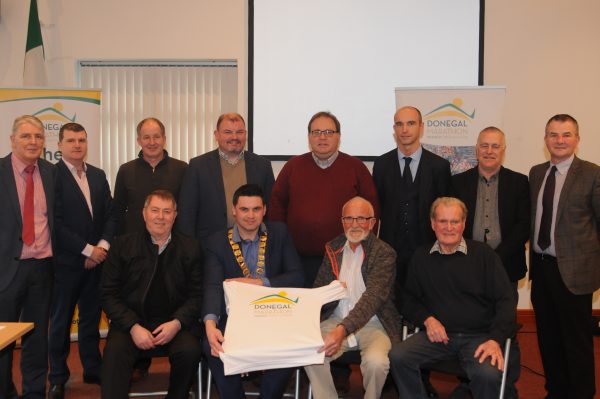 The 2017 Donegal Marathon was officially launched at the Milford Public Service Centre earlier this week. Now in its fourth year, the Donegal Marathon takes place on Sunday, 20th August 2017.

The event was officially launched by former Olympic athlete and event ambassador, Danny McDaid, along with Municipal District Mayor James Pat McDaid and fellow Donegal County Councillors. Registration for the 2017 event is now open and participants can register via www.donegalmarathon.ie.

As in previous years, entrants will be able to choose between the full and half marathon courses depending on their preference. The committee are also pushing the Team Challenge event this year and expect it will grow from its introduction in 2016.

Former Olympian and winner of the 1983 Donegal Marathon, Danny McDaid, said: “We’re calling all businesses, charities, not-for-profits, sports clubs, societies, community groups, parents associations and anyone who can pull together a team of four to compete in this year’s relay event.

“We’re giving runners of all levels the opportunity to team up with three friends, work colleagues, family members or whoever and pit their fitness levels against rival teams, all vying to get their hands on the Donegal Marathon Team Challenge Cup.

“Participants can also use the event to raise much-needed funds for their chosen charity. In fact, we’d encourage charities to get behind the Donegal Team Challenge as well, by encouraging as many teams as possible to run on your behalf.”

Commenting on the launch, Chairperson of the event Dessie Larkin said: “Since it was re-established in 2014, the Donegal Marathon has established itself on the Athletics calendar and has drawn people from all parts of the island as well as further afield.

“The event has attracted participants from as far afield as Australia, Africa, Canada, Europe and the US and we look forward to building on our success to date. We’re also asking those from Donegal who left in previous years to come home and participate, why not tie it in with a trip home – we can promise them an experience and a challenge that they will not forget.”

For more information on the Donegal Marathon and to register log onto www.donegalmarathon.ie. The cost of entry is €45 (Full Marathon), €30 (Half Marathon) and €100 for the Team Event.

Competitors can register by completing the online registration form or by downloading the official form. Postal entries can be sent along with the relevant fee to Anne Condon, Donegal Marathon, C/O Letterkenny Chamber of Commerce, Grand Central Complex, Canal Road, Letterkenny, County Donegal.