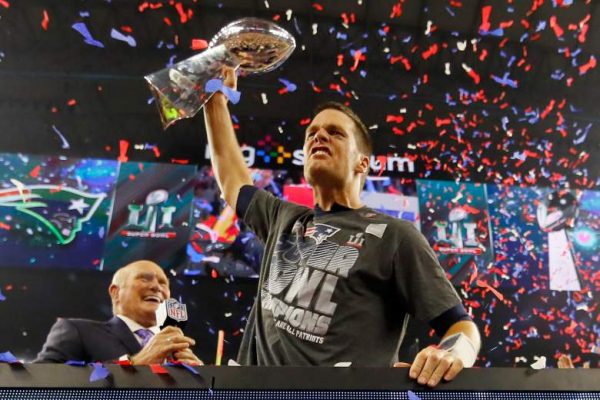 Why Tom Brady gets my goat up!

St Eunans College in Letterkenny may not be a hotbed of American Football. But the recent Superbowl Final had transition year student Seamus O’Donnell a little sleeper than normal after watching a sensational game that finished around 5am.

Here he argues that love him or loathe him, there’s no disputing the talent of Tom ‘The Goat’ Brady.

Tom Brady is up there with the Michael Jordans, the Peles and the Henry Shefflins of this world, as they can all state a case that they are the greatest sportsperson of all time.

He (painfully) won his fifth Super Bowl, only the second person to do so (Charles Haley is the other), and the only person to get the five rings with a single franchise. Loyalty.

There is no doubt that he is one of the most hated NFL players to date, and nobody loathes him more than NFL Commissioner Roger Goodell (or me!). The Deflate Gate scandal was a shambles – a shambles that Brady lost.

Apparently the Patriots deliberately deflated their footballs to gain an advantage, as it is said that slightly deflated balls are easier to throw, catch, and kick, giving the Patriots an unfair advantage.

Brady was the 199th overall pick in the sixth round of 2000 NFL draft. 198 college players were picked ahead of Brady, one hundred and ninety eight. The best draft pick of all time. What a steal.

Brady holds the record for the most Super Bowl rings, winning five out of a possible eight Lombardi Trophies. He has been crowned Super Bowl MVP four times and overall NFL MVP twice. He has been selected for the Pro Bowl twelve times.

He has more playoff wins than any other quarterback. Since Brady became their starting quarterback in 2001, the Patriots have never had a losing season. Thomas led the Pats when they set the NFL record for the longest consecutive winning streak, with 21 straight wins in the 2003 and 2004 seasons.

In 2007, he led the Patriots to the first undefeated regular season since the expanded NFL regular season. Brady and his childhood idol Joe Montana are the only players in NFL history to win multiple NFL MVP and Super Bowl MVP awards. He became the first quarterback to throw for 50 touchdowns in a single season. In 2010, he was chosen as the NFL MVP by a unanimous decision, the only player to be chosen unanimously since 1986. He set the NFL record for consecutive passes without an interception, which was 358.

His father, Thomas Brady Sr. is of Irish descent.

Why Tom Brady gets my goat up! was last modified: February 15th, 2017 by Chris McNulty