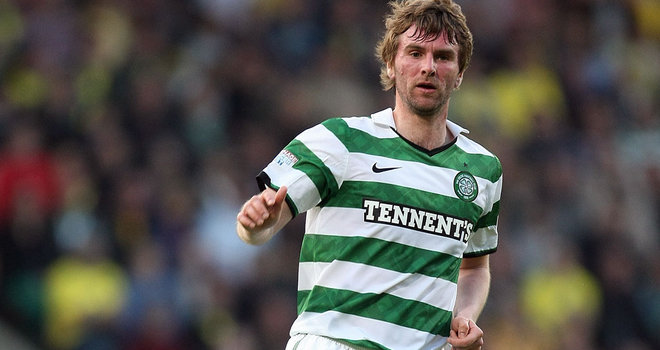 Former Celtic winger Paddy McCourt is on the verge of signing for Finn Harps.

McCourt has been in training with Finn Harps with a view to signing for the Ballybofey side and could even feature in tomorrow’s friendly against Cabinteely.

Harps begin the new campaign when they host Cork City next Friday and hopes are high that a deal can be brokered with the ex-Celtic star.

While the wage demands of the Northern Ireland international could yet prove prohibitive for Harps’ modest budget, it is believed that both player and club are keen to come to an arrangement.

Harps assistant manager Paul Hegarty worked with a player who was dubbed the ‘Derry Pele’ and Hegarty is believed to have been a key part of talks to lure McCourt to Finn Park.

McCourt has been on the lookout for a club since parting ways with Irish League side Glenavon before Christmas and trained with Harps this week.

The addition of the former Celtic ace would be a real message of intent from Finn Park ahead of a season that will see three teams relegated from the Premier Division.

McCourt has been capped 18 times by Northern Ireland, but withdrew from their Euro 2016 plans after his wife, Laura, became sick.

With the player keen to remain close to home and with Derry City manager Kenny Shiels not keen on bringing the player back to his hometown club, Harps are a natural fit.

McCourt, who is now living in Fahan, appeared set to sign with Dundalk when he spent two weeks training with the Lilywhites and even went to their training camp in Spain.

McCourt lives near the Dundalk manager, Stephen Kenny, and the arrangement was later said to have been a ‘favour’ by Kenny, who managed the player at Derry City.

“I’m hoping to find a club and get back playing full-time in the League of Ireland, or as close to full-time as I can,” McCourt said recently.

“One hundred per cent, if the right offer was to come in, I would definitely be keen to have a chat with whoever was interested.”

McCourt played previously in the League of Ireland with both Derry City and Shamrock Rovers and has had spells in Barnsley, Brighton, Notts County and Luton.