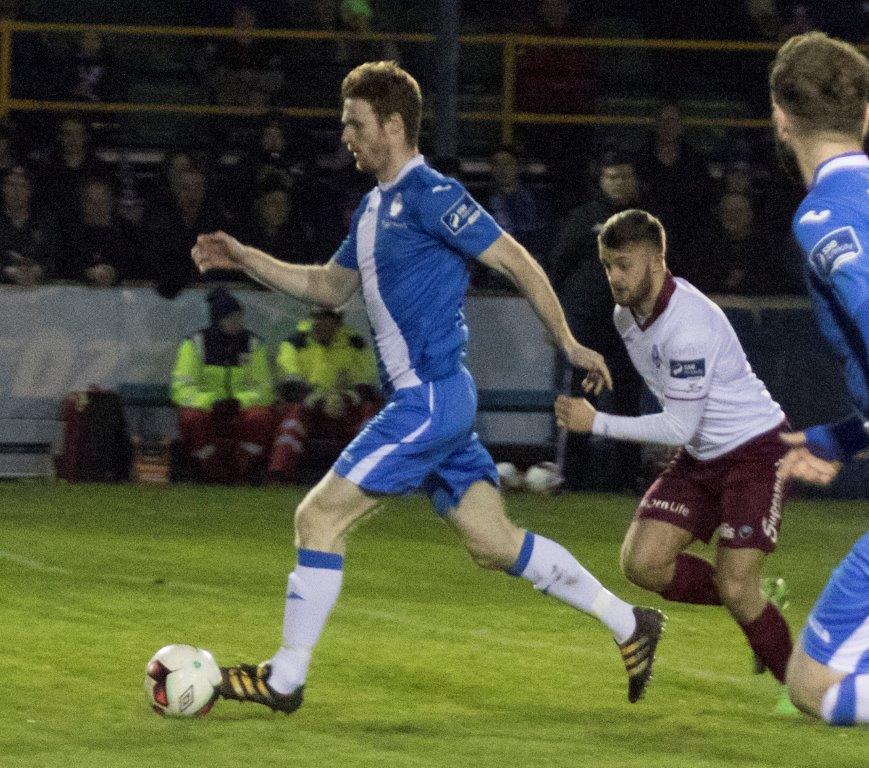 Chris McNulty examines the talking points from the game

In 16 away games last season, Finn Harps won just once – a 2-0 win at Longford Town in June.

Harps’ away form was poor, but they did pick up six draws on the road too and their total of nine losses away from home was better than the other four teams in the bottom five.

That said, it was no secret that Harps themselves saw their away form as shabby, especially given that they had just that sole win in Longford.

But last night, Harps did what no Harps team had done since April 2001 – and win against Pat’s.

In the ten previous meetings, two draws were as much as Harps could muster since 2001.

Back then, Jonathan Speak scored twice, Kevin McHugh and Niall Bonner each scored once as Harps defeated Pat’s 4-1.

On Monday night, Harps showed a new-found resilience on the road and bridged a huge gap for a win against the Saints.

When Jonny Bonner’s slip after three minutes allowed Graham Kelly in to open the scoring, many felt that the curtain could have dropped there and then.

Thoughts swiftly turned to Harps’ previous two visits to the Emmet Road: a 4-0 loss last May and a 6-1 thumping in a 2014 FAI Cup semi-final.

There was real fear that Harps were set for a long night at the office.

The night thereafter certainly wasn’t without its moments and it did seem early on as if the roof could cave in.

Harps saw the opposing side crash an effort off his goalframe for the eighth time in four games and they lived dangerously, but once Sean Houston scored the equaliser, Harps were a new side.

Ciaran O’Connor, with a poacher’s goal just before half-time, gave Harps something to hang onto – and they clung to it as if their very lives depended on it.

The fist pumps at the end towards the visiting supporters told the story in the one shot.

When the team sheet dropped, a little less than an hour before kick-off, it seemed easy to line out the Harps team how they would play – but Ollie Horgan had thrown a curveball.

We expected Harps to start with the back four of Damien McNulty, Etan Boyle, Kilian Cantwell and Ciaran Coll.

However, Horgan opted to deploy Gareth Harkin at left-back and assigned Boyle to a role just in front of a back four that had Coll, the captain, in the middle alongside Cantwell.

It was a selection that raised eyebrows and while Harps still have plenty to work on, this was a line-up that might just have a future.

Coll, the captain, was magnificent at centre-back. The St Johnston man, and Cantwell too, to his credit, led the line superbly once they warmed to the task.

Traditionally, Coll has played all his football on the left-hand side, but his performance here suggests that a new role at the heart isn’t beyond him and he has the pace, game intelligence and skill to play in there without fuss.

Harkin, too, was comfortable at left-back while McNulty is more at home on the right.

Sean Houston was Harps’ Player of the Year in 2016 and there appeared a big danger that he’d part ways over the winter months.

St Patrick’s Athletic, ironically enough, were one of the clubs who were said to be keen on his services, but a move to Liam Buckley’s team didn’t materalise.

Keeping Houston at Finn Park was one of Ollie Horgan’s most important pieces of business in the winter.

Houston carried an injury in pre-season, but with two goals now in his last two games, the midfielder is beginning to show just how important he is.

Houston followed up his goal against Galway with another tidy finish on Monday against Pat’s – both scored off his weaker foot, his right, too.

But there was so much more to Houston’s performance that his goal. He ran the show for Harps – and again demonstrated that he’s a player who can live with the best of them in the top flight.

Bar the sell-out crowd of almost 1,600 at Maginn Park in Buncrana for Derry City’s win over Dundalk, the crowds elsewhere on Monday night were nothing to write home about.

Monday night football for the fourth game of the season hardly seems like a good idea and clashing with a televised FA Cup game between Chelsea and Manchester United is plainly absurd.

Only 895 clicked through Richmond Park’s turnstiles on Monday night.

That said, a winless start to the season has hardly helped their cause – and Pat’s look every inch a side in real trouble right now, even at this early juncture.