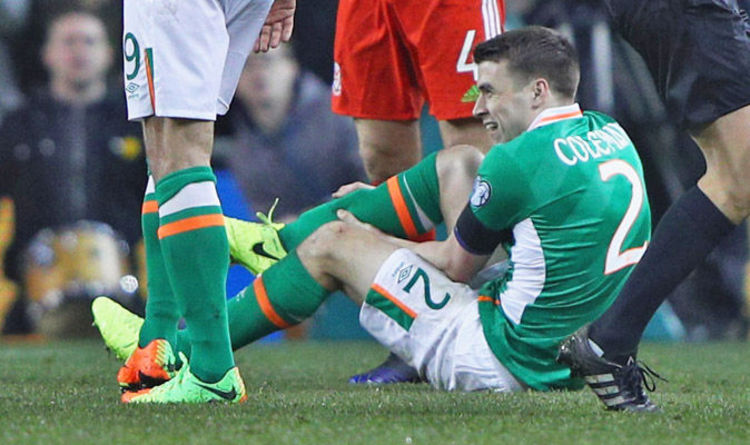 KILLYBEGS NATIVE SEAMUS COLEMAN has the backing of some greats of football as he begins his road to recovery.

The 28-year-old Everton defender underwent surgery on a double break of his left leg on Saturday morning at St Vincent’s Hospital in Dublin and faces at least six months on the sidelines and will undergo intensive physiotherapy to aid his recovery to full fitness. A rash challenge from Wales’ Neil Taylor saw the left-back receive a straight red card in the World Cup qualifier that finished scoreless at the Aviva Stadium.

Wishing @Everton Seamus Coleman a speedy And full recovery, Stay positive pal and you will be back to your best again #Skipper #positive 🙏

Sincere Best wishes,Seamus Coleman-unquestionably one of the most charming & warm people in Irish sport -a top role model.@FAIreland #COYBIG

Can’t talk about the draw!!absolutely gutted for Seamus Coleman!horrible break!It always seems to happen to the good guys!!

Stay strong, @seamiecoleman23 – everyone at @Arsenal wishes you a speedy recovery pic.twitter.com/Qsz0cFamDw

🔵 | @Osman21Leon was gutted to see ‘nice guy’ Seamus suffer a broken leg, but backs his mate to return stronger.https://t.co/sOi1r5MVRL pic.twitter.com/KJUz1ESiPS

Totally feel for Seamus Coleman tonight. Thoughts are with him with the hope of a speedy recovery. #COYBIG

Everyone at St Catherines would like to wish former player and Ireland captain @seamiecoleman23 a speedy recovery from his horror injury. pic.twitter.com/m6rFGPlVJh

Good performance from the lads tonight…thoughts are with @seamiecoleman23 🙏🏻 x 🇮🇪💚🍀

Some of the all-time greats have wished Seamus Coleman a speedy recovery on Twitter was last modified: March 26th, 2017 by Chris McNulty
Tags:
Republic of Irelandseamus colemanWales