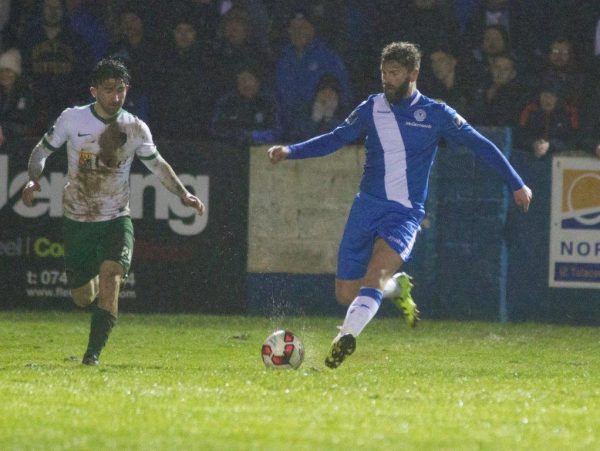 Simon Madden cruelly denied Finn Harps an extension of their unbeaten run of games with a late winner at Tallaght Stadium.

Harps were on course to move to five games unbeaten when the point was snatched from their grasp in the 90th minute.

Michael O’Connor capitalised on a rare error by Harps skipper Ciaran Coll and from his cross Madden beat Ciaran Gallagher with an exquisite lob.

It was the first time that Gallagher was called into action in a second half that had seen Harps take command of things.

The second period had pretty drab until Harps managed to prise Rovers open for their first goal on 72 minutes.

Sean Houston’s delightful threaded pass put McAleer in and the Omagh man was calmness personified as he slotted past Tomer Chencinski.

When McCourt drilled a free kick through the wall and beyond Chencinski, just four minutes later, Harps seemed the most likely to go and win it.

With sub Eddie Dsane, McCourt and McAleer all in fine form, Harps threatened hard, but it was Madden who had the decisive say and spare Rovers the ignominy of a third successive home defeat.

Harps looked to be down and out when they trailed 2-0 after just 14 minutes.

Rovers were under the cosh having been beaten four times in their opening six outings and Stephen Bradley’s team roared from the blocks here with two cracking goals.

Just two minutes in, the Harps defence stood off and David McAllister was allowed to let fly from distance to send a stunning effort in off the underside of Ciaran Gallagher’s crossbar.

The lead was doubled in equally impressive circumstances as Ronan Finn wonderfully fired in off the post.

Harps were stunned and it seemed as if Rovers had already drawn sufficient blood.

Harps were irked at the referee, Sean Grant, who waved away their penalty appeals in the 18th minute.

McAleer’s trickery down the right-hand side fashioned an opening and his cross came off a Rovers defender. In spite of strong claims for a spot-kick – the visiting bench was particularly animated – Grant delivered a firm shake of his head.

Caolan O’Connor had fired Harps up to sixth last Saturday with a late winner in a 2-1 triump over Sligo Rovers, but the on-loan Dundalk striker had to be withdrawn.

O’Connor limped heavily on an ankle injury as he hobbled off with Barry Molloy making his entry at that point.

Paddy McCourt, like Molloy, had been labelled as doubtful, but the former Celtic ace was named to start her, taking the place of the injured Damien McNulty.

McCourt carved out an opportunity for Danny Morrissey with a delicate ball in behind the Rovers rearguard, but his attempt came off the outside of the post.

McAleer warmed the palms of Rovers netminder Chencinski on the half-hour, but the incline was pretty stiff for Harps as they parted ways at the break trailing by two.

When Morrissey was played in by McCourt on 65 minutes, the frontman found the angles too tight and, although he managed to get a shot away, Chencinski saved and Morrissey pulled up injured.

Unable to continue, Morrissey was replaced by Dsane, who had a big impact as Harps summonsed again their never-say-die qualities.

First McAleer and then the sublime McCourt raised the away voices and Harps were on the road to a deserved share of the spoils until Madden pounced.

It was one of those nights where the dejection and feeling of what might’ve been among the traveling support told the tale of the tape.