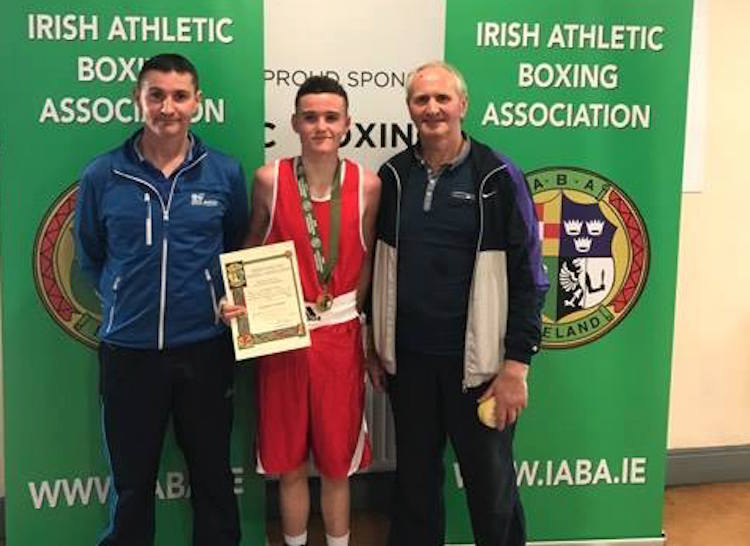 Sean Kelly gave up soccer to concentrate on boxing – and his decision reaped the biggest rewards yet yesterday as the Dunfanaghy ABC puncher won his first Irish title.

Rarely has Kelly been as well primed for a title tilt as he was yesterday.

Last April, Kelly reached the Youth 1 46kgs final, but lost out to Terry Donoghue from Athy in a tight decider.

Donoghue went on to win a European silver medal and it gnawed away at Kelly that it could have been him on the continental stage.

A shoulder injury kept him out of the Commonwealth Youth Games Tournament in Belfast, but Kelly’s eye had long since been on getting back to an Irish final.

He took part in a major tournament in Boston with a Donegal selection last month.

Eddie Harkin, his coach at Dunfanaghy ABC, knew he was ready for this one – and so it proved yesterday as the ghosts of 2016 were well and truly put to bed by Kelly.

His was a controlled, disciplined and impressive performance to collect the prize.

Kelly is a talented soccer player and lined out for Bonagee United. But he could no longer juggle the sports and, with his mind focussed on the National Stadium, soccer took a back seat.

That call was vindicated yesterday when Kelly smashed his way past McDonagh in the final for what was Donegal’s only slice of glory on the finals day.

Eoin McGarrell of Raphoe ABC was bidding for his second Irish crown, but the Welchtown man lost out to Na Fianna’s Stephen Doyle in the Junior 1 48kgs final.

McGarrell missed out on a split decision verdict, but will take good heart from reaching the finals day again.

Letterkenny’s Paddy McShane was also aiming for a second Irish title, but in the Boy 4 36kgs final he lost to John Joyce from Olympic Mullingar.

Carrigart middleweight Barry Donnelly was beaten by Thomas Doherty from Baldoyle in his Boy 4 decider.