Video: Calls for Army assistance in Inishowen as gorse fire continues to rage

written by Chris McNulty May 9, 2017
Facebook0Tweet0LinkedIn0Print0

As a massive gorse fire continues to blaze on the Urris Hills in Inishowen, calls have been made for the Defence Forces to be drafted in for assistance.

Since Saturday, fire crews from Buncrana, Letterkenny, Carndonagh and Moville have been fighting with the flames near the scenic Mamore Gap.

Firemen have been on the scene since Saturday and thanks to their efforts some postcard thatched cottages in the area have been saved from the inferno. 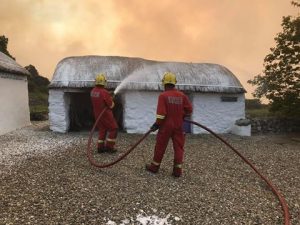 Now, Sinn Féin County Councillor Jack Murray has called on the army to be brought in.

“I’ve been speaking to people on the ground who have been fighting this fire since Saturday,” Councillor Murray said.

“This is clearly an extremely serious situation and I have made a call for the army helicopter of civil defence to be drafted in to assist the effort.

“I have spoken to the Director of Service in Donegal with responsibility and he has assured me that he has made contact with the Defence Forces and that they will be called in, if deemed necessary.”

Paul McMenamin, Eye in the Sky shared the below drone footage of the fire on YouTube…