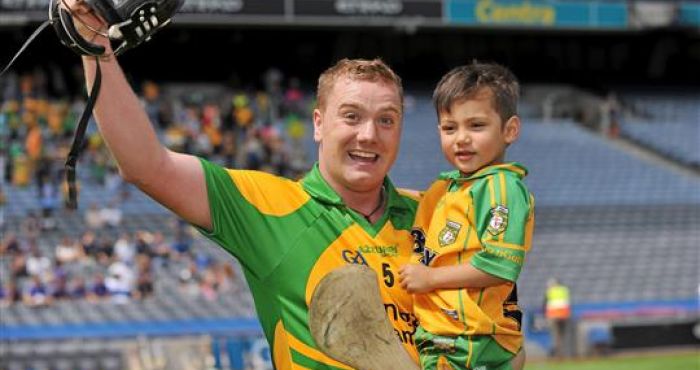 Jamesie Donnelly: One of Donegal’s greats has called time on his inter-county hurling career

Jamesie Donnelly was never one who took wearing the county colours for granted – but the Sean MacCumhaills man pulled the green and gold over his head for the last time on Saturday.

Donnelly has hung up his inter-county hurl in the aftermath of the 1-16 to 1-12 defeat to Monaghan in the Nicky Rackard Cup at Inniskeen.

Donnelly has been a mainstay of a great period for hurling in Donegal.

A ferocious warrior who could mix it with the best of them, Donnelly leaves a huge void in the Tir Chonaill defence, but there will be a gaping hole too in Donnelly’s weekly routine too.

“It was a massive part of my life,” he says.

“I’d been contemplating it last year but I said that I’d give it one more year with the county. The time comes to us all.

“It still wasn’t an easy call to make. The aul legs were starting to slow and the forwards aren’t looking any older – they seem to be getting younger!”

Donnelly was a talented footballer in his youth too and played minor and under-21 football for Donegal.

But it was with the camán that he had his greatest hours and the days that marked him out as one of the leading men the sport has ever seen in these parts.

Donnelly won an All-Ireland Minor ‘C’ title with Donegal in 2002. The side that defeated Longford 1-12 to 2-4 had Joe Boyle in goals while Justin McGhee, Marty McGrath, Kevin Campbell and Enda McDermott lined out.

Donegal won the Lory Meagher Cup in 2011 and the Nicky Rackard Cup in 2013 and Donnelly was a central player in both wins.

“Although the Rackard one was a higher grade, the Lory Meagher win was better, I think,” he says.

“We had lost four finals and we had an ageing team. We thought that we’d never get over the line so it was really special to do it.”

Donnelly represented Ireland in the Shinty competition and has donned the Ulster colours in the Railway Cup, but the 17 years of playing for Donegal clearly mean a lot and the emotion is evident that the county chapter has ended in his book.

“It was a massive honour to play for Donegal,” he says.

“We’re a massive football county, but it was always a huge honour to play for Donegal hurlers. I was always proud to wear the green and gold. It was very difficult last week to know that I was pulling off that jersey for the last time.”

A week before Saturday’s loss to Monaghan, Donegal suffered a heavy 4-19 to 0-16 defeat to Tyrone and it was evident that the scars of that loss had a huge affect.

Donnelly says: “We never recovered from the Tyrone defeat. That one was an awful kick in the teeth. We completely under-performed, every single one of us and it spread all through the team. We got off to a good enough start against Monaghan, but they were very clinical and we just couldn’t get going in the second half. It was very disappointing.”

He is keen to thank his parents, Seamus and Helen, his wife Claire and children, Ella and James, for their support in his Donegal career. And perhaps their support became even more important given what he had to endure in the early months of 2016.

Donnelly suffered horrific injuries when a chainsaw ripped between his legs and into his lower abdomen in a freak accident at work. He spent almost three weeks in Letterkenny University Hospital and needed three operations and well in excess of 100 stitches.

There were times when he didn’t know if he’d even walk again, let alone lift a hurl and sliotar.

Nine months later – having been back in action as early as last March – and in September he was key as MacCumhaills defeated Burt in the Donegal SHC final. Donnelly played at full-back and put on an excellent display which included one goal-saving block at a vital stage of the second half.

Donnelly was captain of the first MacCumhaills team to win the Donegal SHC in 2010, lining out alongside his brother Martin in the final; an ‘unreal feeling’ as he puts it.

Times have changed and times have moved on drastically from his early days around the Donegal set-up.

He says: “It’s a massive change. It’s a full-time job now. You’re always at something, from the gym to training on the pitch, to doing Pilates, or whatever it is.

“At the very start, it was Tuesday-Thursday-Sunday. On a Sunday, it was just a case of: ‘See you on Tuesday, lads!’ I didn’t see a weighing scales until about six or seven years ago.

Donegal’s loss is most definitely Sean MacCumhaills’ gain – and Donnelly is aiming for another big summer with the Twin Towns side.

He says: “I had great memories with Donegal –  was lucky to get to Croke Park six or seven times with Donegal –  but I’ll go back now with the club and give back something to them. It’s a new year for the club. We had every man back in training this week again and it’ll be a boost to have us all training now.”

Jamesie Donnelly: One of Donegal’s greats has called time on his inter-county hurling career was last modified: May 12th, 2017 by Chris McNulty

Late winner gets Naomh Conaill over the...

Kilcar battle through the wind and rain...

Aileach on top in goal fest to...