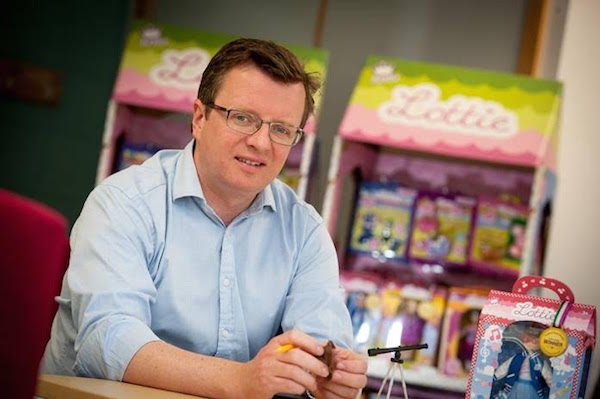 My Donegal… with Lottie doll co-founder and CEO Ian Harkin

Ballybofey man Ian Harkin is the ‎Managing Director of Arklu, the company who manufacture the world famous Lottie Doll.

Arklu first began by creating a Kate Middleton inspired doll. Upon realising the gap in the market for a wholesome alternative to other dolls that were on the market, they launched Lottie Dolls in late August 2012. Unlike many other dolls on the market, Lottie dolls are inspired by nine-year-old children, making them relatable, age-appropriate, and fantastic role models.

Their vision is to empower children, embracing their individuality and encouraging meaningful adventures.

This is Ian’s Donegal…

(1) What is your favourite place in Donegal and why?
There are so many, Moville where my dad is from is up there, the shore walk is one of the best tonics you can get to clear your head, the sporting capital Ballybofey where I’m from, going to watch the Harps on a Friday night, having a Kinnegar beer and pizza in Rathmullan House, Dunfanaghy on a Saturday, my favourite is probably Maghery, a small village outside Dungloe where we spent our summers as kids, fishing crabs or fish, eating wild mushrooms and drinking Football Special in Packies Bar, going for a night swim to cool the sunburn then watch sunsets over Arranmore and the Atlantic were pretty special memories.

(2) If you could change one thing about Donegal what would it be?
My single biggest bug bear is the complete lack of adequate road infrastructure, having lived in London for 13 years I returned regularly and saw the developments occur right throughout the island except in Donegal. I watched as the National Development Plan was being completed through the country and Donegal was left to last and then first to be put on hold when the crash happened.

Since then other projects have started and in the case of the Ballybofey bypass it was removed recently from the national development plan in recent months with no mention by politician or paper. We just accept it. With the peace process there was mention of a peace dividend which was meant to be infrastructure in the North and border counties, it never happened.

I read recently that Leo Varadkar will prioritise the Ballybofey bypass and seek to upgrade the planned A5 to motorway status, I look forward to seeing if a sod will be turned in his term in office.

(3) Who is the one person in Donegal that you look up to and why?
Deirdre McGloin is someone I admire, constantly pushing the boundaries on trying to improve the service Harvey’s Point offers. More than anyone I know in the county she is pushing tourism relentlessly to Donegal.

I’ve never met Deirdre but reached out to her asking a favour and without question she offered help, giving back to your community and passing on knowledge and confidence to others that are starting out is all you can ask and Deirdre does that in spades.

(4) Daniel O’Donnell or Packie Bonner?
Interesting that they both come from within 5 miles of each other. It would have to be Packie though for his performances for Ireland, Packie’s twin brother Dennis was the hero in our house though, playing midfield for Harps!

(5) What has been Donegal’s proudest moment in recent years?
We have a lot to be proud of whether it’s sports, music, education, research, industry, arts, drama, tourism, food, film etc I could talk for ages on any of those subjects, in terms of a moment I’ve noticed a massive change since a returned, before I returned, the vibe was very much doom and gloom, negative sentiment everywhere, before that there was arrogance, but now there is confidence a renewed pride in what we have, that moment of change is very tangible for me and I absolutely love it, you seen people now help each other and communities being restored, a new community different to the one we grew up with but even better now as we are more tolerant of change and outside influences.

(6) What was Donegal’s saddest moment?
Unfortunately we’ve had a few, the ones that sadden the most are those that are not only preventable but are repeated, in Donegal we have had too many deaths on our roads, we have a culture of tolerance of antisocial and dangerous behaviour on our roads. The courts and Gardaí do not seem to be able to do anything about it, I’d suggest cars should be taken from repeat offenders and crushed, the only way to address it is taking those cars off the road and affecting the owners financially.

(7) What is your favourite Donegal-made product?
I’ve a hoodie made by Edel McBride and a tweed jacket by Triona from Ardara that are my favourite garments, Kinnegar beer I love, I used to love seeing Kulana on shelves in the UK or Rumblers (Killygordon) on flights or on sale in Boots, Nomadic yogurt drinks are a recent discovery and the mango lassi is a favourite.

(8) Who is Donegal’s greatest ambassador around the world and why?
There are many that I mention in this piece and there are those that get mentioned and rightly so like Daniel O Donnell and Noel Cunningham, our Ministers most notably Pat the Cope and Joe McHugh really impress me with their work ethic and servitude, the original team of 5 or 6 that managed to bring Pramerica to Donegal really stand out though.

I don’t know if people in Donegal realise the quality of the highly skilled jobs that are performed in our county, to be able to convince a major US corporation to offshore its IT services to a remote location in Ireland and not just do that but build on it with each trip to America is an outstanding achievement. These are highly sought after transferable skills and the economy here is highly indebted to them.

(9) Who is Donegal’s most successful businessperson in your opinion?
Gerry Robinson I really admire, the part I admire the most is that he came back having reached the pinnacle of the corporate world in the UK.

Gerry’s investment in Oakfield Park in Raphoe, a labour of love for him is an amazing legacy for Donegal, for those who have not yet visited I highly recommend taking a visit with the family.

(10) Who is your favourite Donegal sportsperson of all time?
Donegal people seem to excel at team sports but it’s the people participating in individual sports that stand out for me, Jason Black adventurer, Chloe Magee in Badmington and Ballybofey’s Jason Quigley compete at the top of their sports in the World, what impresses me most though is that they give back, Jason is out giving motivational talks in schools, Chloe and her brother want to create a world class performance centre in Donegal and Jason is out in the community every time he is home, all amazing ambassadors of the county.

(11) What is your favourite Donegal restaurant?
Food in Donegal used to be based on the amount of food on the plate and price. In London one of my favourite foods was Indian, we ate recently in Pink Garlic in Letterkenny and it was honestly the nicest I’ve ever had, I like my curries that’s a big statement.

For fine dining level the Lemon Tree probably is top but there are amazingly a lot of very good choices now. For pub food Rosatos in Moville, okay Eddie is my cousin but seriously check it out if you can get a seat that is. Pizza mmmmstone baked pizza is a favourite and the Cellar Rathmullan and Logue’s in Carrigart are both amazing.

(12) Donegal’s golden eagles or basking sharks?
Basking sharks, I’ve gone kayaking with Inish Adventures in Moville a few times and seen Porpoise, Seals and a Sun Fish (check it out). There is so much to see off our coast and I highly recommend a day out, you don’t even need a really dry day as you are in the water anyhow, you see so many videos now on social media of different caves and beaches, I’m keen to get out and see more this summer.

(13) What is your favourite Donegal saying or expression?
“Wile”

(14) What is the biggest challenge facing the people of Donegal today?
If we want to create jobs, keep our family in Donegal then we need to have motorway access to Dublin and also have proper roads in Donegal, there is no point to promoting relocating here, if people are getting stuck in traffic in Letterkenny or Ballybofey the same amount of time on their commute as people are in Dublin.

(15) What is your favourite Donegal food?
The seafood Chowder served in Nancy’s Barn in Ballyliffen is probably number one.

(16) Is there anything that really annoys you about Donegal or its people?
No just the car culture I mentioned earlier.

(17) Do you have a favourite local band?
Right now we have Eve Belle, Chanele McGuinness and Rosie Carney all from Donegal who are amazing performers, Donegal is unlike any county in Ireland for live music, so many people who come here comment on it, no favourites it’s the variety and quality of it that makes you proud.

(18) What makes Lottie Dolls stand out?
She is competing in the toughest category in the Toy Industry and doing so from a base in Donegal. Challenging stereotypes, empowering kids, addressing body image and doing so with a fraction of the budget the big manufactures have. Spending 264 days on international space station and being nominated in two categories of the Toy Of The Year earlier this year have been the highlights so far. 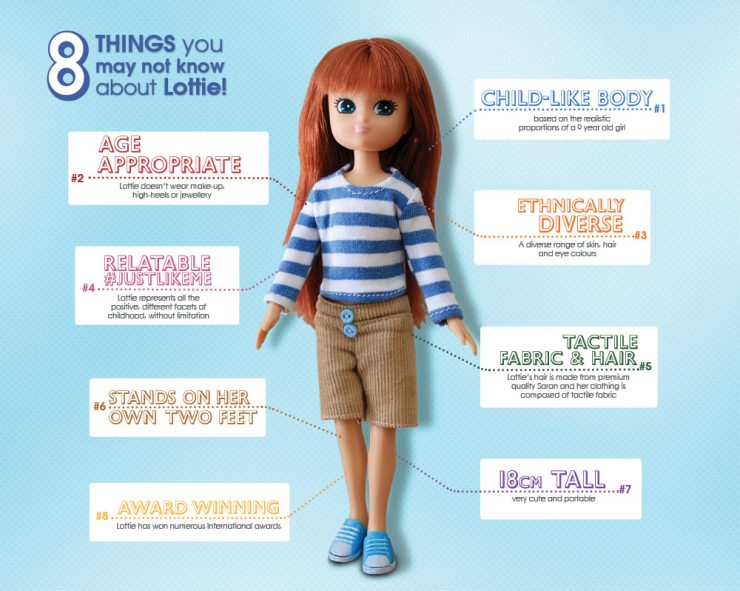 (20) Is there anything about Donegal that you are very proud of?
From crafts to music to sports and business, Donegal people consistently over achieve with significantly less resources it’s that stubbornness and never giving up trait that I’m most proud of.

To check out Ian’s work you can visit Lottie.com