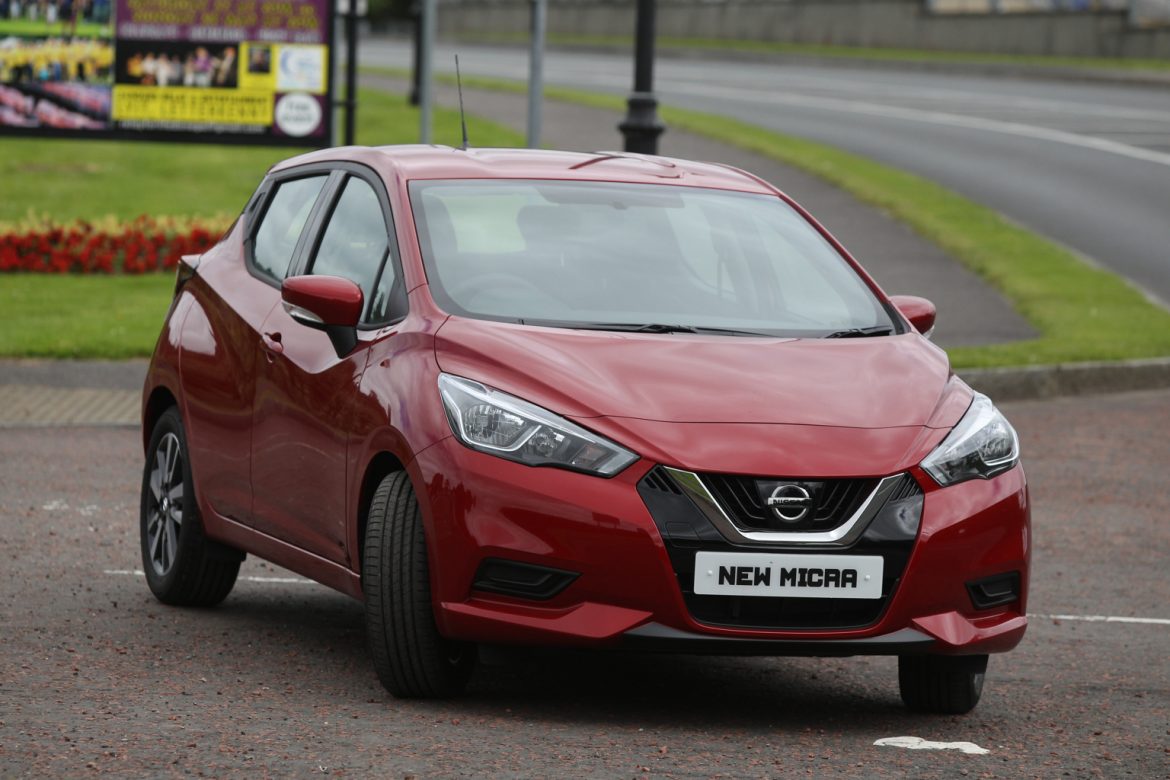 DD Motoring: .9 is the new ‘perfect 10’ for the Nissan Micra

“Yeah it’s pretty clear, I ain’t no size two,
But I can shake it, shake it like I’m supposed to do,
‘Cause I got that boom boom that all the boys chase,
All the right junk in all the right places.”

I just love this cover by Kate Davis of the hit song “All About the Bass” which I was listening to this week on the radio in one of the top of the range models of The New Nissan Micra at the showrooms at Inishowen Motors. It had a fantastic Bose speaker built into the driver’s seat headrest which just vibrated down my back when I turned it up full.

As I kept in beat with the sound of the beautiful bass in this song I was thinking more about the base model of the new Micra which I was really here to drive which is one of the new age cars which will be one of the trend setters of Irish motoring.

A view of the the all new Nissan Micra which we drove this week courtesy of Inishowen Motors. Photo Brian McDaid

Nissan Micra’s account hacked!
If the new Nissan Micra logged on to its Facebook account, those invisible boys up in the clouds of big data would be convinced that the Micra’s account was hacked. A wee selfie of the new Micra would look nothing like the Micra that we are used looking at for years.

The Micra that started life as a replacement to the Nissan Cherry as the smallest Nissan in the range all those years ago has evolved through the generations of Micras and rounded its shape over the car’s history. This was the shape and image which built the profile of what we always associate the Nissan Mica to be and over the years the Micra became more rounder and bigger – like us all.

This new Nissan has completely changed its image just when the Leaf and Juke all have followed suit in their round design. The New Nissan Micra has gone trend setting again with a car that might look a little smaller than its predecessor because of its lower stance but the car is in fact bigger than the car it replaces.

Sitting inside the New Micra I couldn’t get over how much room that was in it for the driver, more than a VW Golf in my opinion! The Nissan has a very fuss free interior with loads of coffee cup holders that actually fit coffee cups for a change! I was in the base model which had air con, cruise control and bluetooth which all give a driver a very warm welcome, which is also cool in these summer days.

.9 is the new perfect 10!
On the road I was looking forward to seeing what these new .9 engines were really like. And I have to say I was impressed considering it’s under 1,000 cc and in the base model that I drove this petrol engine had 75 BHP (with the Turbo Petrol version having an extra 15 BHP on tap.) On the hills you will have to use this cars gearbox a lot more to get the best out of the engine.

Looking under the bonnet of the Micra this three cylinder engine looks small but works well and sounds lovely with that off beat sound of the three cylinder petrol engine.

A view of the new .9 petrol engine in the New Nissan Micra which we drove this weekend. Photo Brian McDaid

What this small engine lacks in power makes up for in euros when you go to the pump to fill it up with petrol. It’s very easy to get over 50 miles to the gallon with a bit of care, that’s roughly the same return you will get in fuel economy with a diesel version which will cost an extra €3,000! And the savings don’t stop there!

The sweetest note that I heard from this Micra was the price I got back for a quote for insurance for myself which weighed in at €383, that’s €200 less than what I am paying at the minute for a 1300 diesel vehicle.

If you were to avail of the payment plan for the insurance of €32 per month plus €149 deposit and Nissan’s finance from €156 per month with a deposit of €4,995 on the car or trade in you could be on the the road and insured in a new car for as little as €188 per month! Nissan also have an offer with any Micras bought before the end of July 2017 of free car insurance (which is subject to conditions).

Writing this report this week I couldn’t help but notice how many 10 to 15 year old Nissan Micras are still doing the daily commute around Donegal which is as good a testimony as you need of the reliability of these cars. This new Nissan ticks a lot of boxes as a good-looking easy to run, easy to insure brand new model. Prices start a €18,250 for petrol XE, similar to what we drove with the diesel 1.5 starting at €21.250 and the Turbo petrol starting at €19,250.

A total professional
I was saddened to hear the news on Monday this week of the departure of Highland’s anchor presenter Shaun Doherty. I have to say the airwaves will be a different place not hearing his voice in the background of our day to day life in Donegal.

It’s over 10 years ago in 2006 that I had the mad dream of a fundraising drive from Letterkenny to Monte Carlo to raise money for the Donegal Hospice. On the run up to announcing this fundraiser things were not going to plan as well as I had hoped they would and as the press releases were going out to all local papers that helped get the news out which I couldn’t thank enough, I was invited on to the Shaun Doherty Show to chat about my fundraiser which in my heart I was privately thinking was going to fail.

Waiting to go on air I was like a bag of nerves as the interview started, thinking back I am sure Shaun seen what I was going through but never let on. After a shakey start Shaun had me calmed down and had me chatting about something that, before that moment was only a pipped dream.

Back in 2006 at the start of the Mini To Monte Carlo run for the Donegal Hospice, Thank you Shaun Doherty for all your help.

Loads of people have dreams like this but unfortunately tell the wrong people about them who think it might be safer to tell you about all the pitfalls so in “their view” you won’t end up making an idiot of yourself!

Shaun Doherty had my dream up and running in style before we came off air. A listener rang Tony Kelly who was sponsoring our car for the trip and traded in her Red and White Mini Cooper which fitted perfectly with our request on the radio.

Without Shaun Doherty and his production team that work round him on his show, my trip might have made it over the line but never would have raised the awareness for the Donegal Hospice that it did without the professional approach that Shaun Doherty does day in and day out on his show.

I never will get a better chance to thank everyone that helped in anyway on that fundraiser nearly a decade ago but especially Shaun Doherty who made it possible for us to end up presenting €46,000 to Carrie Harvey who received it on behalf of the Donegal Hospice in memory of her late husband Eamon Harvey.

Thank you Shaun for believing in this venture.