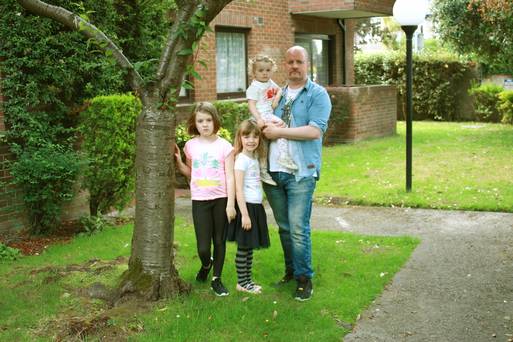 One Dublin family who are forking out 60pc of their income on renting a two-bed home for five are moving to Donegal to escape huge rents and seek a better quality of life.

Ronnie Byrne (36) and his wife Stef have been paying €1,500 a month for a two-bed apartment in Sandymount, where the father was brought up.

But as rents rise and the couple’s children, Orlaith (5), Aoife (2), and Niamh (8), are growing, the family have been left with little choice but to leave Dublin.

He told the Irish Independent “It wasn’t a decision we took lightly because of the kids,” Ronnie said. “We had been considering it for a year-and-a-half as rents got higher and higher and it was becoming harder to find places to live.

“We are making a purely financial decision because we want to be able to save to put a deposit down on our own home one day.

“And we had seen how much more space we could get in a house in Donegal for a fraction of the rent.”

But the couple’s eldest daughter was upset she would have to move school and leave friends behind – and their second eldest had only just completed her first year and was happy in her school.

But they convinced them the move is for the best. Each girl will have her own bedroom for the first time, and gardens, front and back, to play in.

“Rents are a quarter of what they are down here in Dublin,” Ronnie said. “The more we looked into it and at the schools, the decision was made for us.
“We are spending 60pc of our income on rent.

Friends had suggested they move to areas outside of Dublin, such as Ashtown in Co Meath – but this didn’t appeal, even if it was nearer to the city.

“We have family up in Donegal, so we’ll have a support network,” Ronnie said.

“I’m angry about the complete inaction from the Government. Our politicians are out of touch regarding the effects their lack of action on this housing crisis is having on normal families.”

Ronnie, who recently graduated in digital technology and design after retraining, will be on the job hunt for work in Donegal.

Their new four-bed home in St Johnston, near Letterkenny, costs them €650 a month.

Why one family have thousands of good reasons to move to Donegal was last modified: July 11th, 2017 by Stephen

Roadworks at Pearse Road/Oldtown in Letterkenny to...

Over €128,000 granted for new community playground

Man who knocked on station window and...