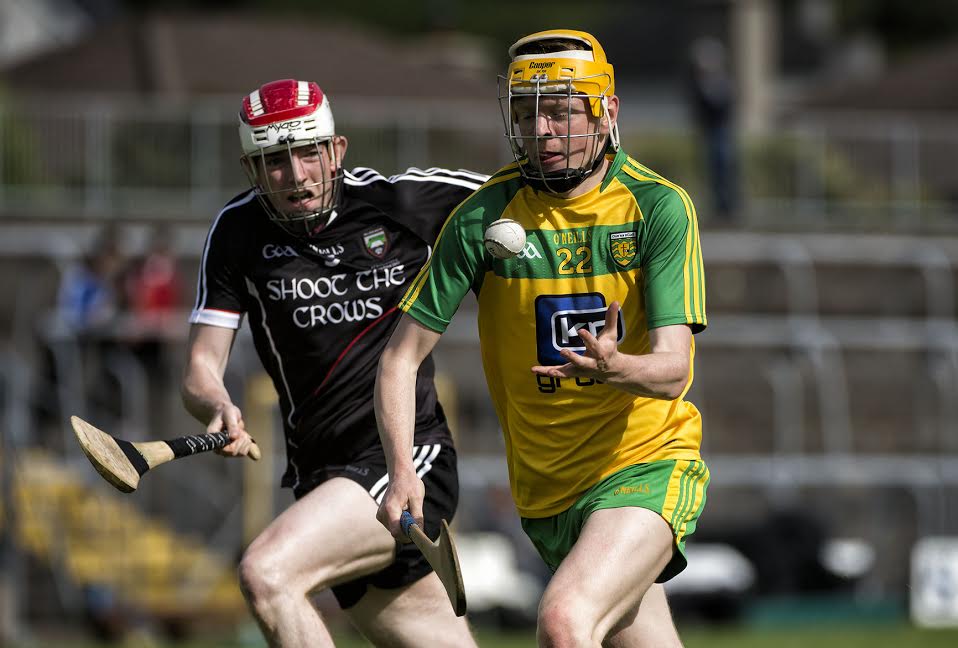 Donegal retained their hold of the Andrew O’Neill Cup as Tom Hennessy’s team eked out a win over Sligo in the All-Ireland Under-21 ‘C’ final at Markievicz Park.

After a blistering start by Donegal, Sligo fought back to level the game with 11 minutes to go, but the Tir Chonaill men – through Ben Doherty, Sean Curran, Kevin Kealy (2) and Eddie Lynch – registered five late scores to keep hold of the silverware they’d won in the previous two years.

It was tense at times, with Joe McHugh’s frees keeping Sligo in the mix until, finally, Donegal moved into a winning position with those six points in the final six minutes.

Donegal had a dream start as they raced into a 1-3 to 0-1 lead by the fifth minute, including a third minute goal by Oisin Rooney that was to prove the game clincher.

Sam ‘Roe’ Doherty made the play with a superb run, scything his way through from deep before off-loading to Rooney and the Aodh Ruadh man steadied himself to sweep home from close range.

Kevin Banks shot Sligo in front with a massive free, clipped from well inside his own half, but Donegal scorched back, spurred by that goal from Rooney.

Doherty, having assisted Donegal well in those early moments, got in with a fine point of his own while braces by Eddie Lynch and Sean Curran kept up the fast-paced start to the contest.

It was far from one-way traffic, though, as Sligo were kept in touch by Eamonn Kilgallon’s pair of points, one of which saw him volley goal-ward after being picked out by Gerard O’Kelly-Lynch on the turn.

Donegal had another sniff of a goal chance when Aaron McAuley flashed wide while Donegal ‘keeper Tom Clare had to get out to take the sliotar from the timber of Joe McHugh.

The scores dried up a little and there were only three scores on the board from then until half-time, Curran getting his third of the day, Doherty weighing in with his second and Jack O’Loughlin sailing over from a ’65 to put Donegal 1-7 to 0-6 in front at the short whistle.

Conor O’Grady, Lynch and captain O’Loughlin played on each of the previous two final wins, against Tyrone in 2015 and Fermanagh in 2016, while Ciaran Rami, Stephen Doherty, Sam ‘Roe’ Doherty, Aaron McAuley, Sean Curran and Paul Nelson all featured in last summer’s triumph.

Sligo inched their way right back into Donegal’s airspace with a trio of frees at the start of the second half, but the full-forward miscued with another two that could have drawn the Yeats County level.

Donegal put a plug in the drain when Aaron McAuley batted over after Rooney skilfully skipped his way through to open up a possible goal chance.

However, Sligo were level with 11 minutes to go as Banks beautifully sailed over after another pair of frees by McHugh.

Donegal scored just once in the first 23 minutes of the second half, but subs Doherty and Kealy scored either side of a rocket by Curran from an acute angle as the Tir Chonaill men wrestled away to take a now familiar prize.

Donegal move into the All-Ireland ‘B’ Championship with a quarter-final to come against Kerry.

Late winner gets Naomh Conaill over the...

Kilcar battle through the wind and rain...

Aileach on top in goal fest to...

Here’s when and where the weekend football...