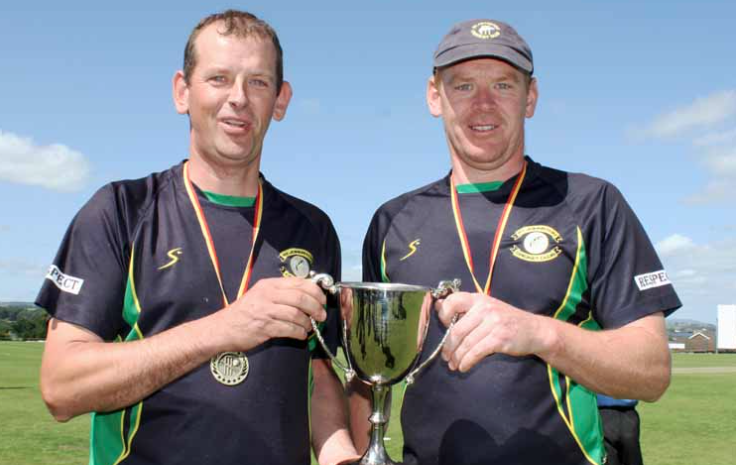 Cricket – St Johnston leave it late, but get must-needed win

written by Chris McNulty July 24, 2017
FacebookTweetLinkedInPrint
St Johnston had to wait until the 49th over to claim a vital win over Bonds Glen yesterday in the North West Championship.
Having suffered a heavy loss to Ballyspallen on Saturday, this was a must-win game for the Saints.
Picture caption: Ian Macbeth and David Macbeth, who lined out for St Johnston on Sunday.
The Saints got off to a fairly poor start with Bonds Glen being on 57 for the loss of 0 after the first ten.
A bowling change did the job as David Lapsley first removed M. McBeth for 13 and Ian Macbeth then removed K.Magee  for a well crafted 42.
The induction of spin really put the breaks on the Bonds Glen innings.
Jacob Maroske with 1-26 off 10 overs and David Anthony with 2-29 off 10 overs. That being said, the Bonds Glen pro stood his ground and finished the innings with an almost chance less 71 not out.
Bonds Glen closed their innings on 219 leaving the Saints 220 for a vital victory.
The Saints’ chase got off to a poor start losing Jack MacBeth bowled for 2 runs.
A good partnership between MacBeth brothers Alan and David took the saints into the 90’s before Alan fell for 45.
Michael Rankin and skipper Lapsley chipped in but it was  David MacBeth whom ploughed on in the scorching sun and was incredibly unlucky to fall just 8 runs short of a century in the 42nd over.
This left Ian Macbeth and newly promoted number 7 David Anthony 38 runs off the remaining 8 overs.
St Johnston struggled against some tight bowling from M Curry and D Curry.
Ian Macbeth (12) was caught thanks to a fantastic catch from J Mulder off the bowling of M Curry.
Nathan Cole joined David Anthony at the crease with Saints requiring 10 off the last 12 balls.
Anthony made it a victory for the saints with a six off the last ball of the 49th over to secure victory, Anthony finishing on 18 not out and Cole finishing on an important 2 not out.
Cricket – St Johnston leave it late, but get must-needed win was last modified: July 24th, 2017 by Chris McNulty
FacebookTweetLinkedInPrint
Tags:
David AnthonyDavid LapsleyDavid MacbethIan MacbethMichael RankinSt JohnstonST JOhnston Cricket Club