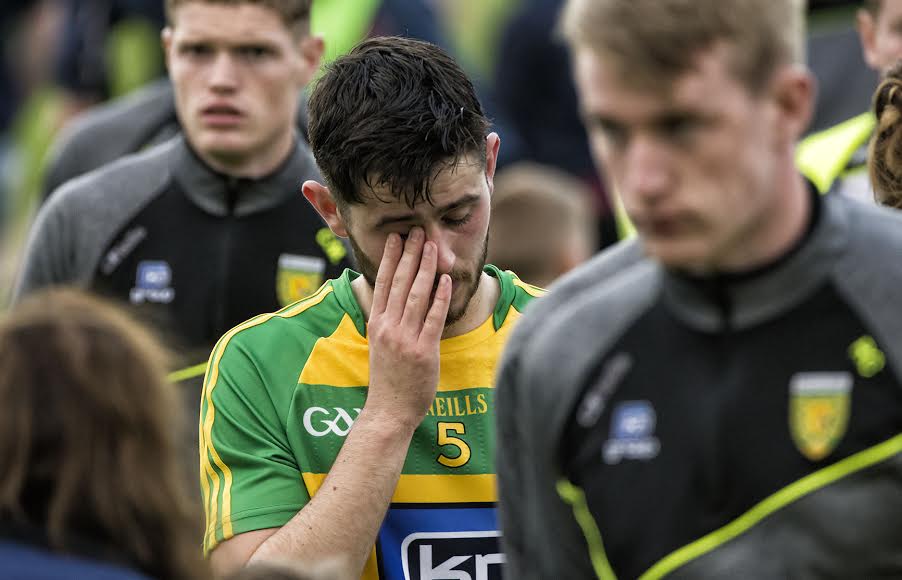 Rory Gallagher might have anticipated that he had a big job on his hands, but even he couldn’t have imagined that he would be contemplating a second Championship hiding of this, his third summer in the job.

Gallagher himself could argue, with a degree of reasonability, that 2017 was ‘year one’ of a four-year term he sought and got following an All-Ireland quarter-final defeat to Dublin last August.

The winds of change swept across Donegal in the weeks and months after that game. An era ended as Donegal bid farewell to some of its greatest ever servants.

It was never going to be easy, transitioning from an era of greatness into another of steadying the ship.

The problem for Donegal now, after shipping damaging, demoralising defeats at the hands of Tyrone and Galway is that no-one knows quite where the line rests on the graph. Perhaps even Gallagher himself might be wondering on that front.

“They’re trying to get to a level, but it was a rude awakening against Tyrone and a rude awakening today,” Gallagher conceded following Saturday’s 15-point trouncing by Galway at Markievicz Park.

“We were well and truly beaten. We were outclassed all over the pitch. A couple of things didn’t go our way, but all those things added up to a lot.

“They have to bed in. This is a tough day. It’s not easy, but it’s a test of character. The boys who ended up having good careers had a lot of very tough days.”

It was a fair point, if one remembers that Colm McFadden and Eamon McGee, for instance, were put down as cast-offs seven years ago after a qualifier defeat to Armagh that was regarded as Donegal’s low-water mark.

The most worrying aspect for Donegal followers in Sligo was the likeness to those bad old days. Supporters heading for the exits with the ending a long way in the distance and the body language on the field suggesting an acceptance of the writing that was scrawled on the gable wall before them.

Donegal were obliterated in that spell.

Gallagher said: “The period before half-time was difficult to take. It was a massive challenge for us at half-time. We have a lack of experience. From goalkeeper to left half-back, only Paddy McGrath and Neil McGee played in 2014. We know we’re exceptionally inexperienced.

“It was difficult at half-time. We were in a sticky wicket. We were 11 points down and we lost Mark Anthony. The challenge was to get back and get a foothold. We needed possession and we were in trouble at midfield.”

Paul Conroy, Johnny Heaney and Thomas Flynn had given Galway a dominant control of midfield, where Donegal couldn’t compete.

Gallagher said: “We’ve been in difficulty at midfield for three years now. Neil Gallagher, Ryan Bradley, Rory Kavanagh, Christy Toye, players who played for a long period of time are gone. There is a much-debated conversation about Michael Murphy. We feel we know our players best. We threw Jason in there who has just finished his Leaving Cert and we have Michael in there with him.”

The absence of the that experience and power was perhaps never highlighted as plain as Saturday, when Donegal’s young guns found the going much too tough.

The turnover now will increase, too, it is expected.

Four-time All-Star Karl Lacey hunkered in tears at the end while Frank McGlynn had been called ashore in the first half.

As Donegal fans made their mournful getaways, they were just two of the players on the lips. Two more of Donegal’s greats who could well be at the end of the line.

Gallagher said: “At the end of last year, we came up beaten by Dublin and it was clearly the end of the road for that team. We relied a lot on experience. I didn’t expect them to land on the scene and compete.

“The likes of Jason (McGee), Kieran (Gillespie) and Eoghan Ban (Gallagher), they have to find their feet. A lot of men there aren’t established county players and it’s a long journey.”

Donegal’s use of their substitutes outlined their tale of woe. Michael Murphy and Martin McElhinney were black carded early in the second half – after ‘keeper Mark Anthony McGinley suffered a similar fate in the first – but Donegal had their quota of replacements used up by the time Murphy was shown the book in the 43rd minute and they would finish with 13 men as a result.

Gallagher said:  “We threw boys in to try and turn the tide and that left us very light in the second half. It was a chance we were willing to take. We felt we had to throw extra lads at it. We had a lot who were under-performing and we wanted to get others in to try and pull it around.