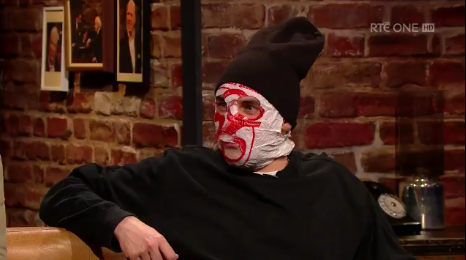 Opinion: ‘Haunted bread’ comments are “an attack on our Christian beliefs”

Following controversial statements from two guests on the Late Late Show, opinion has been divided over whether or not the comments made about the Catholic Church were appropriate.

Broadcast in January, statements made by Rubberbandit member Blindboy Boatclub and writer Stefanie Preissner garnered a massive 1,352 complaints. The Broadcasting Authority of Ireland have since dismissed 11 of these.

Blindboy Boatclub said “Anyone who I know who goes to midnight mass is not going there for haunted bread. They’re there because their grandmother is making them go or because their whole family is there.

“Everyone who goes to midnight mass is half-cut anyway.”

He later added “They’re asking us to eat the ghost of a 2000-year-old carpenter you know? And then at the same time he’s not only a ghost he’s actually real; so he’s a ghost and has human flesh at the same time and he’s 2,000 years old.”

Preissner remarked that as a child she thought the idea of eating the body of Christ was “a very scary concept” and referred to it as “cannibalism”.

Retired Garda Sergeant Christy Galligan says he was offended by the statements, and says that the BAI’s dismissal of some of the complaints makes it seem like “open season on Christian beliefs.”

In a letter to Donegal Daily, Galligan says; “Are they, the BAI, serious or are they having a laugh at our expense? The audience is the wider public and over 1300 people thought it was offensive. By this judgement they’re saying its open season on our Christian beliefs.

“This opens a whole realm new possibilities for anyone that wishes to comment on religious or no religious matters. Though I’m very aware of the Incitement to Hatred Act.

“I can guarantee if it was an attack on another religion or non-religious group there would have been uproar and sanctions meted out. The “lads in the bags” would not be as quick to cause others other religious or non religious groups offence because they know what the possible outcomes could be.

“As an Irish Christian and Catholic I take offence to this form of denigration of our religious beliefs. I don’t go out to denigrate other religious or non religious. I should be afforded the same courtesy as I would give others. There is a small cohort of people in our Society who because of their beliefs, or non beliefs, that we the majority of Christians should stay quiet and do as we are told.

“We have seen the constant chipping away of our religious ethos. The hype surrounding school admissions, the removal of catholic symbols that could cause offence from schools or hospitals, is just part of a campaign by minority groups to push aside the very embodiment that helped to shape our country and the people in it.

“I am not an apologist for the scandals in the church, lest some of the PC crowd think I am, but the idea that my belief as a Catholic Christian should be set aside, in all its forms, just to appease a minority is deplorable and must not be countenanced. Would those non religious attempt to go to a Muslim or other Country and pursue their aims with same equal vigour? I think not because they would know the very harsh sanctions/punishments that would be meted out.

“For many centuries Irish Catholics cowed in the face of an onslaught by other religious. We stood together to right that wrong and we came out of it bigger and stronger as a people and as a Nation. Let’s not be cowed again by a small faction of anti religious or non religious groups that demean and trample on what I and others hold dear. We should all be part of moving forward and respect each others traditions, beliefs or non beliefs, but stop telling the majority of Irish Christians what they can and cannot do.”

What is your opinion?