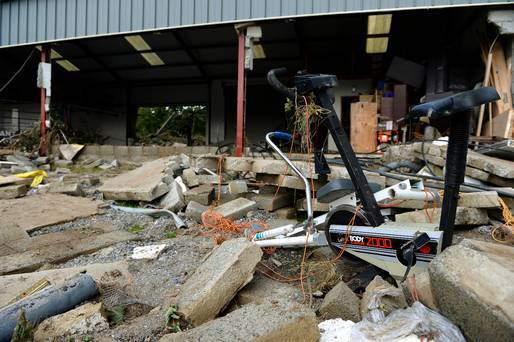 Top boxing promotor Eddie Hearn is to get behind a Donegal Boxing Club destroyed by last week’s flooding in Inishowen.

Hearn – who has the likes of Katie Taylor, Anthony Joshua and Tony Bellew in his Matchroom Sport’s stable – responded to an SOS from Dunree club member Charlie Duffy on Twitter.

Dunree’s equipment, at Celtic Park just outside Buncrana, was washed away in Tuesday night’s flash flooding.

The brick walls on the shed that houses the club were torn down by the manacing waves and the heart swept from the club.

“Most of our equipment is gone down the river. It’s a disaster.”

The club launched a GoFundMe appeal last week and have raised €320 so far, while they are also appealing for donations of equipment.

Hearn asked the club to send his team an email.

Please send an email to Karen.mazzone@matchroom.com we will try and help