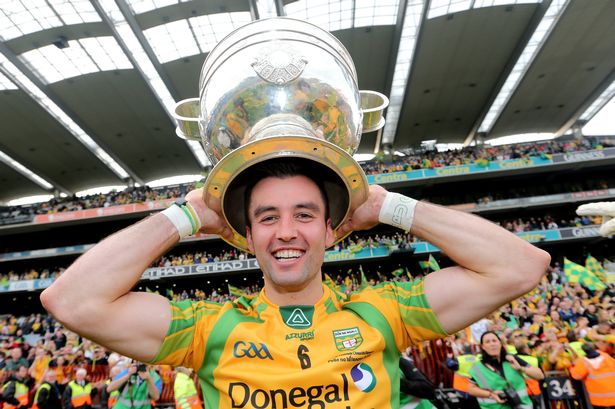 Karl Lacey: Perfectionist, pure footballer and one of Donegal’s best ever

Karl Lacey studied himself and the game he played more than most.

The Donegal town man went way beyond the cones and balls that littered the training fields during a Donegal career that spanned 14 seasons, 148 appearances and a haul of honours that eclipses anyone who wore the green and gold before him.

Lacey won two of his four All-Stars before Jim McGuinness’s would take Donegal, its people and its football into a different world.

His first two All-Stars, in 2006 and 2009, were during years when he gained a reputation as being one of the meanest man-markers in the game.

Lacey was a perfectionist.

The clinching point against Kerry; making his 100th Donegal appearance in the semi-final win over Cork; the on-the-money arrow that found the paws of Michael Murphy for the time-stand-still goal in the final; or that moment, when Maurice Deegan shrilled the final whistle in the final and the ball was in the arms of Donegal’s classy number 6.

Lacey, spent by having to play six games in 22 days with his club, Four Masters, would need hip surgery late in 2012.

A remarkable record of 41 consecutive appearances in Championship football was over when Donegal overcame Down in the 2013 Ulster semi-final.

A mark of just how meticulous Lacey was came in 2014.

Donegal headed for Derry and a possible banana skin on the road to redemption. But McGuinness was at work and Lacey was back in the groove again. 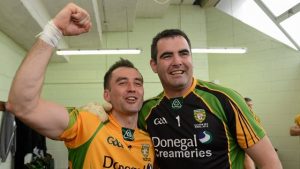 Lacey was Man of the Match as Donegal defeated the Oak Leaf but as he recalled one incident in the game he described himself as ‘absolutely disgusted’.

Lacey had been given the task of marking Mark Lynch. Back from whence he came in his formative years with Donegal.

Lynch managed a point in the 63rd minute and despite being named as the afternoon’s top performer, Lacey – Donegal’s Mr Consistent – wasn’t impressed.

It genuinely weighed him down.

“Thankfully it didn’t have an impact on the game,” he said. “The main thing is keeping an eye on my man. Mark Lynch got a point near the end of the game – I was absolutely disgusted with that.

“It’s just about trying not to let the boys down. You do your own job well and build on from that.”

At the time, Lacey was a student at University of Limerick where he was studying for a Masters in Sports Performance. Lacey loved the learning and the challenge to keep improving.

A dispossession of Niall Holly that afternoon in Celtic Park – starting a move that would end in a point by Anthony Thompson – was Karl Lacey at his finest.

And it was a moment, too, that illustrated a player who’d worked hard on perfecting an ancient art.

“When you’re a defender, you need to know how to tackle,” he remembered later.

“It is key now because every team has free takers who can pop over scores from 50-55 metres and you’ve ‘keepers coming up now who are every bit as accurate as the forwards. The way I see it, if you aren’t conceding frees with the tackles the less chance there is of conceding a score.”

Lacey’s discipline was remarkably faultless for a man who spent many of his days shadowing some of the country’s most feared forwards. With Lacey at their shoulder, the fear was redirected.

Lacey – one of his former manager’s most trusted lieutenants – was described by McGuinness as a ‘Rolls Royce of defender’ and Martin McHugh reckoned he was ‘a pure footballer’.

It was certainly lofty praise from The Wee Man.

Debate will rage for a generation on just who is or was Donegal’s best ever.

It is an impossible argument that has no right or wrong, but Lacey’s pitch would be almost watertight.

To see him at his best was a privilege we perhaps only realised as his participation levels deteriorated in more recent times. 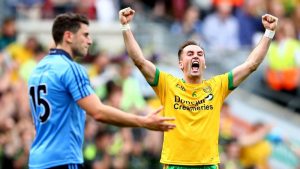 Lacey rarely did interviews, but they were always worthwhile when he did address the Fourth Estate. Lacey was engaging, intelligent and articulate. A career in coaching will beckon for a man now employed by Letterkenny Institute of Technology and who has already begun to impart his wisdom on a future batch of Donegal footballers.

Lacey did his work experience for his Masters at Arsenal FC and every second of his time at London Colney, the club’s training ground, will have been used.

When Lacey returned from a holiday in 2012, he opened many letters, but one in particular stood out.

Lacey is a lifelong Arsenal man who was in the State de France to watch the 2006 Champions League final, which Arsenal lost 2-1 against Barcelona and he received a signed letter from Arsene Wenger, the Arsenal manager, following Donegal’s All-Ireland win.

Lacey had always been a star-in-the-making, but under McGuinness he took off. Many wonder what might have been had Lacey – deliberately targeted and subsequently injured during the game – not been forced off injured in the 2011 All-Ireland semi-final loss to Dublin in 2011.

Those who knew him weren’t surprised by his rise.

Enda Nolan remembers the days before Karl Lacey’s name was lit in lights at national level.

Nolan managed Lacey at club level for six at underage level and nurtured that unique talent from his days with the under 12s to the minor grade.

Even then, Lacey stood out.

“He was very dedicated and put in a lot of self-practice. His skill level was always top drawer,” Nolan recalled in 2012.

“He was predominantly right footed, but he practiced religiously with his left foot in his own time. Once a week or twice a week in training you just don’t get the time for that sort of development. 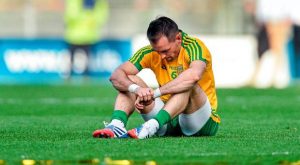 Karl Lacey after the 2014 All-Ireland final defeat to Kerry

“Karl was a great leader too and the way he applied himself in matches inspired players even at that level.”

He remembered vividly an Under-14 game against Naomh Columba in Fintra when Lacey nullified Glen’s main man, Gary Kennedy.

“Karl really put on a show that night – them going man-to-man was a great spectacle,” Nolan said.

Inter-county forwards will sleep a little easier this winter knowing those white boots won’t be laced up again in 2018.

In Donegal, they are boots that can neither be filled nor replaced. 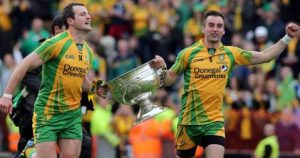