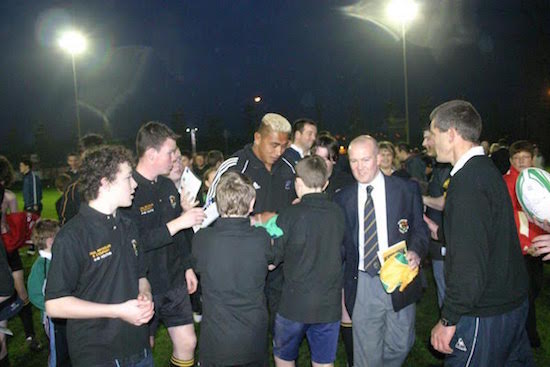 Plans have been announced to commemorate the centenary of the birth of the legendary rugby All Blacks Captain, Dave Gallaher.

The anniversary celebrations will take place at the Dave Gallaher Park, Ballyraine Letterkenny and in the Town Hall Ramelton on Saturday October 21st.

On this coming Wednesday October 4th members of Letterkenny RFC will join with many others from New Zealand and the world of rugby to commemorate the death of Dave Gallaher who lost his life in the Battle of Passchendaele in 1917 and is laid to rest in the Nine Elms cemetery there.

Born in 1873 as David Gallagher in Ramelton, parents emigrated 1878 with him and his brothers and sisters to New Zealand and changed their name.

He became the most famous rugby player of all time and captain of “the All Blacks”.

And in a never to be forgotten evening on November 9th 2005 in Donegal, the All Blacks came back to the birthplace of Gallaher in his native Ramelton.

The man himself Dave Gallaher

The occasion was to commemorate the centenary of the historic 1905-06 Originals’ tour, which was captained by Gallaher.

The Originals were also the first New Zealand team to be called the All Blacks, and, 100 years on, the 2005 touring party officially named Letterkenny RFC’s home ground the Dave Gallaher Memorial Park.

The players and coaching staff joined the club’s under-age players in a skills session and unveil a plaque at Gallaher’s birthplace, a former drapery (home of the late Ena Corry) and a former shop run by Gallaher’s father before the family emigrated to New Zealand in 1878 when Gallaher was five years old.

Gallaher first played for New Zealand against Australia in 1903, but is best remembered as captain of the 1905-06 tourists. Their tour of Britain, Ireland, France and the USA redefined the game of rugby and helped a fledgling New Zealand forge a national identity.

Gallaher died during the first World War and while several All Blacks teams have visited his grave in Belgium, the visit to his birthplace in Co Donegal is thought to be a first.

At the Market Square on that memorable night, team captain, Tana Umaga said Dave Gallaher is a great among greats and he was instrumental in building the All Blacks tradition. We’re pleased for the chance to pay our respects.”

Full details of the events on October 21st will be announced later, said Kevin Shiels this week.