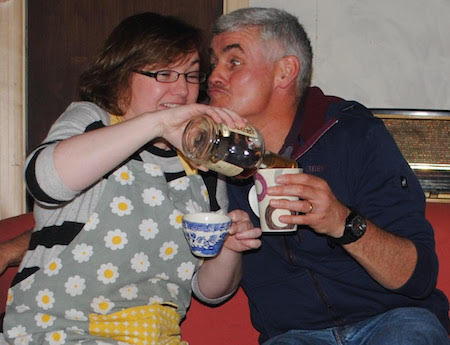 This will be the third comedy play hosted by the GAA club in as many years. The cast and crew are working hard to bring another hilarious comedy to the stage. Early signs are that it promises not to disappoint.

Sam Cree is a Co. Antrim born playwright who wrote popular comedies such as Widows’ Paradise and Don’t tell the Wife. He also wrote for the Carry On films and English comedians such as George Formby and Arthur Askey.

Letterkenny Gaels Stalwarts Gary Coll, Celine Bradley and Sheila Sweeney return to the stage for the third year to complete the hattrick of comedies with director Paddy O’Connor.

However, this year’s production will see some fresh faces on the Letterkenny Gaels stage with last year’s stage manager Catherine Cannon, Sally Mullen and Orla McElaney making their stage debuts.

Gary Coll is joined in the male cast by two more debutants Conor Walker and Alan Wright. The cast is completed by well-known thespian and all-round funny man Andy McGranaghan.

The hard-working cast and crew have been practising for the last number of months under the guidance of director Paddy O’Connor. Paddy will be assisted by Karen Murphy as his stage manager. Long time club member Paddy O’Connor has over 20 year’s experience directing plays, musicals and pantomimes.

Paddy said “This is the third year for the club to take on a major stage production and it’s running like clockwork so far”. There is a real can-do attitude about the club and everyone is really putting their shoulder to the wheel”..

“Separate Beds is one of the funniest Sam Cree plays I have worked on and audiences will not be disappointed this year again”. “Due to the success of the previous two plays, the tickets will be in high demand so my advice is to get your tickets early”.

This hilarious comedy will run for 8 nights over two weekends from Thursday 12th to Sunday 15th and Thursday 19th to Sunday 22nd October in the Letterkenny Gaels Club room on Thorn Road.

Tickets can be bought at the Arena 7, George Sweeney’s Shop, Swilly Group Office on Business Park Road, from members of the cast or Letterkenny Gaels committee members. Contact Conor Crossan (087) 133 2680 for ticket information.

Letterkenny folk use their “blocks’ for new...

The Henry Girls taking to the virtual...