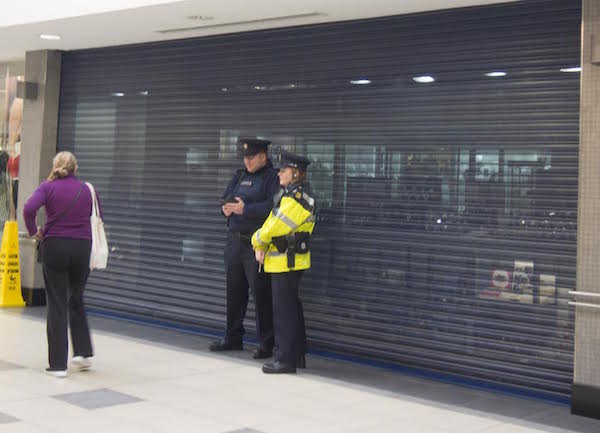 A gang which broke into McCullagh’s Jewellers in Letterkenny dug five different holes in the roof of Letterkenny Shopping centre before they got the right access to the building.

The gang, believed to be the same crew behind a spate of recent robberies in the county, struck in the early hours of yesterday morning.

The thieves escaped with a quantity of jewellery but discarded much of it on wasteground as they escaped to the rear of the premises after an alarm was set off.

Again the gang broke into the premises through a roof area as they did in a number of the previous raids at Kernan’s Centra in Newmills, Bradley’s newsagent/post office in Killygordon and the Supervalu store in Dungloe.

However, Gardai are satisfied the gang specifically targeted the jewellery store as they cut four holes in the roof before finally entering their choice of store.

A Garda source confirmed “It would appear they specifically targeted this store as they cut four holes above other stores but did not enter them.

“They were after the jewellery but thankfully the alarms did their job and Gardai were alerted and were on the scene quite quickly after that.”

Gardai say they are satisfied they could be dealing with the same gang who broke into the four other premises in the county in the past month.

As well as leaving a number of tools behind them including a lump hammer and hatchet, the gang used head torches and other specialist equipment.