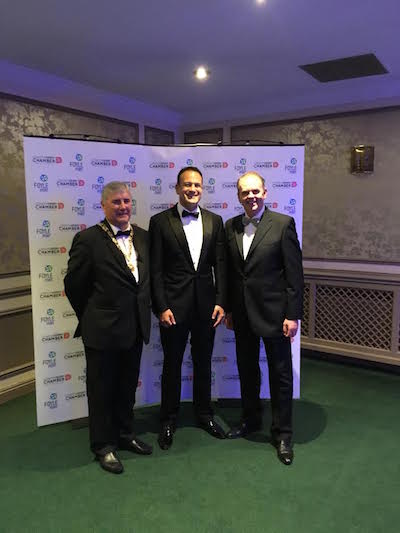 Taoiseach gives ‘cast iron’ guarantee on A5 and commitment to Letterkenny

Deputy Joe McHugh has welcomed a ‘cast iron’ guarantee on the development of the A5 by Taoiseach Leo Varadkar in Derry this evening.

Mr Varadkar was addressing the annual Chamber of Commerce dinner at the Best Western Hotel at Campsie and also said his Government is committed “not just to the A5” but also the “road to Letterkenny” and the roads through Monaghan to the A5.

Minister McHugh said tonight: “The Taoiseach recognises very well the infrastructural challenges of the entire North West, of Donegal and Derry, and the need to improve transport links.

“I welcome his comments again this evening; that the commitment of the Irish Government to the A5 is cast iron and that the money has been allocated by the Minister for Finance. The Taoiseach also said that connecting the North West with Dublin wasn’t just about the A5 but the roads to Letterkenny and the roads through Monaghan to the North.

“The completion of road projects like between Dublin and Donegal and on to Letterkenny are vital for future development. The Taoiseach has championed better North-South connections – building bridges – and his speech tonight has once again reflected that position.”

During his speech this evening, the Taoiseach said: “Our 10 year capital plan will support links between Dublin and Derry-Londonderry and Donegal. The Irish Government has already made a very significant contribution to the construction of the A5 dual-carriageway.

“The commitment is cast iron and the money has been allocated by the Minister for Finance. I want to see that project go ahead as quickly as possible.

“I also believe that the completion of routes from Dublin to Derry and Donegal should be a strategic priority for governments both north and south.

“We know how important this road will be for the connectivity of Derry and Donegal to the rest of the island and we are looking for this project to be advanced as rapidly as possible.

“An investment in infrastructure is an investment in the future, and will benefit the people and businesses of both parts of this island.”
The Taoiseach also said the critical road connections from Dublin included the roads through Monaghan and the roads into Donegal and Letterkenny.

Taoiseach gives ‘cast iron’ guarantee on A5 and commitment to Letterkenny was last modified: October 13th, 2017 by Stephen Maguire