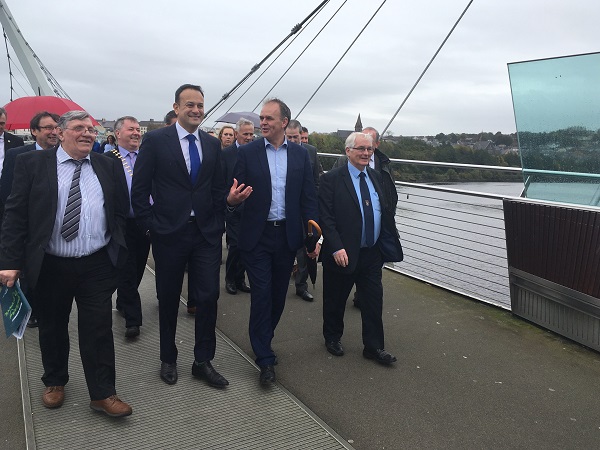 Donegal TD and Government Chief Whip Joe McHugh has congratulated local authorities on both sides of the Border for their vision for the future of the region.

“The Taoiseach takes a huge interest in what happens in Donegal and in Derry and the relationship between north and south,” said Minister McHugh.

“As Transport and Tourism Minister he committed finance to the development of the A5 and gave the go-ahead to the Wild Atlantic Way.

“As Health Minister it was his vision which now allows cancer and heart patients to be treated at facilities at Altnagelvin funded to the tune of €19M by the Irish taxpayer.

“The Taoiseach and I were given an up to date position on the incredible cross border work on job creation, education, tourism and a number of other important sectors.

“I want to pay tribute to council chief executives Seamus Neely and John Kelpie and to local councillors and staff for their continued work benefiting citizens on both sides of the border.”

Minister McHugh said he was also delighted when the Taoiseach announced today that the Irish Government is to release €2.5M in funding to help the work of the Partnership.

“The Taoiseach also understood clearly the need to develop further the education links between LYIT and the Magee University Campus,” said McHugh.

“As for the A5, we both agreed a start to the Derry-Strabane part of the route can’t begin soon enough and the Taoiseach expressed frustration at the delays in getting it started as our Government has committed to funding it.

“Everyone at our meeting today agreed that enhanced transport links between the North West and Dublin are vital for economic growth as is the further development of the facilities at Greencastle harbour.

“Derry will play a key role in the Irish Open at Ballyliffin next year, another example of the ongoing co-operation.

“The councils began all this work well before Brexit and we are seeing the results now. It was good to have the Taoiseach here today to hear what has happened so far and what is needed for the future.”