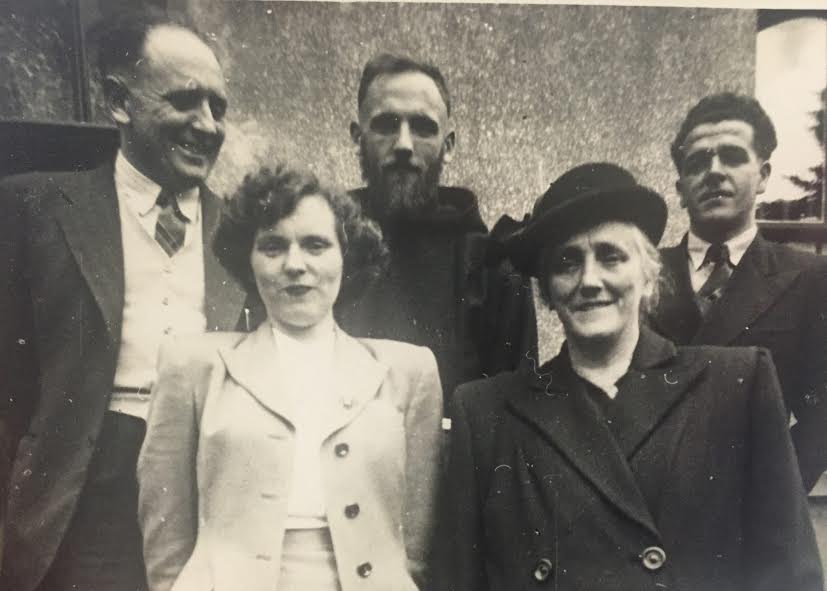 DD Motoring: A 1940s letter, the changing of ‘posts’ and the last ‘Telegram Boy’

I recently bumped into a postman in Boyces Cafe in Letterkenny.

We talked about the weather, as you do when you don’t want to talk about what is really on your mind. As the postman was departing he mentioned a post that I had up on Facebook about a letter dating  from I944.

Picture: Fr. Mark when he joined their Capuchin Order first pictured getting a visit form his mother Brigid, his brother Charlie and wife Agnes and brother in law Miah Deeney in Rouchestown Cork.

Today a post means a different thing with social media and the likes compared to what a post meant back in the day.

The headmaster read the letter out to the class.

The department of Post and Telegraphs were looking for young boys to take up the job of Telegram Boy in the postal area of Letterkenny.

Many of the boys at the school at that time would be going no further than primary school for their education, so as you could imagine there was a good show of hands for the job.

Those who applied for the job were asked to sit an exam in Irish for the post of telegram boy.

In October of 1944 an official looking letter arrived by post to 19 Ballymacool Terrace . It was addressed to a fourteen year old Cornelius Coyle. The letter typed in old Irish font informed Cornelius that he was successful in his recent exam for the post of telegram boy and was instructed to report to the postmaster in Letterkenny at 09.15 on Monday morning to take up his first job.

In 1944 the second world war was still raging, and the sight of a telegram boy arriving  at the door of a home always run the risk of bearing bad news. 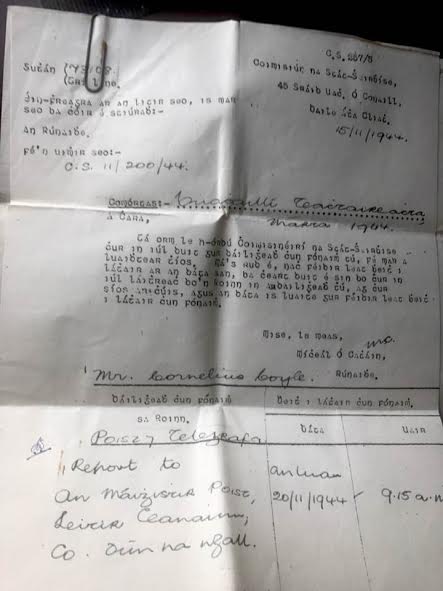 In them days all urgent messages were transmitted via telegram, even big companies like Lough Swilly Railway used an internal telegram service to relay messages.

A story was once told about an engineer with the railway by the name of Finnegan who was very busy writing up reports on the continuous derailment of the train in Donegal.

His reports were too long for the regular derailments so he was advised to be short and to the port when he was reporting on the next incident.

Finnegan was annoyed at the railways advice and in protest he sent his  next short report by telegram which read.  OFF AGAIN . ON AGAIN . AWAY AGAIN.  FINNEGAN …

Cornelius worked as a telegram boy in Letterkenny to he was promoted to the rank of postman at the age of eighteen. It should have been a job for life but the young Ballymacool man arrived home one evening to tell his parents that he wanted to deliver a message of a different kind.

His parents were God fearing people but were unsure if their son would be the right person for the vocation he was hoping to follow. It was only when the local priest, Fr. O’Callaghan arrived at 19 Ballymacool Terrace to reassure Cornelius parents that their son would make a good priest.

In the late 1940’s Cornelius Coyle prepared for the Capuchin Order in Rochestown in Cork.

In his first two years he wasn’t allowed home or any visits from his family so now he was only communicating by letter home to his family in Ballymacool Terrace.

Cornelius was moved nearer home for the final part of his training to Ards Friary in Cresslough, before he returned to Letterkenny in the late 50’s for his ordination just yards away form his old school at St. Eunan’s Cathedral in Letterkenny.

Cornelius now took the name Fr. Mark after his ordination and was to spend 60 years in the priest hood. Over them years he share the joy of officiating at births and weddings but also helped when people could not deal with the pain of bad news.

This was the case in the 70’s when he was ask to support a grieving father when he could not take himself to telling his sons that their mother had passed away. 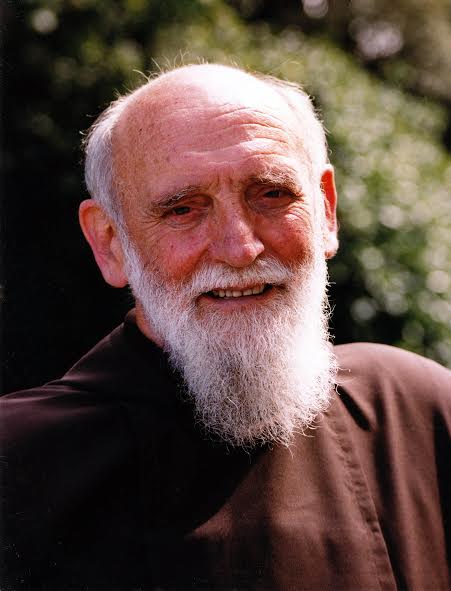 Fr. Mark Coyle who work as a telegram boy in the postoffice in Letterkenny before joining the capuchin order. Photo By Brendan Vaughan.

It was Fr. Mark who was the bearer of the saddest  of news to the oldest of the boys age only 5 and 6 years that their mother and his sister Mary Ellen had passed away.

In 2010 three priests met up in Ards and took the opportunity to have an early celebration of the life spent in the priesthood.

They all started on the same day but thought that might not met up again for a while because of their postings around the world.

Not unlike the conversation about the weather Fr. Mark’s health was now failing, so the three of them decided to get their photo taken together.

They also wanted a copy of the photo each so the rush was on to get prints made before they departed from Ards.

As the photographer was waiting for the pictures to get printed he accidentally found an old negative that Fr. Mark had forgot he had.

When scanned it ended up an old black and white photograph of the three same priest pictured when they were prepared for the priesthood over 50 years before that. 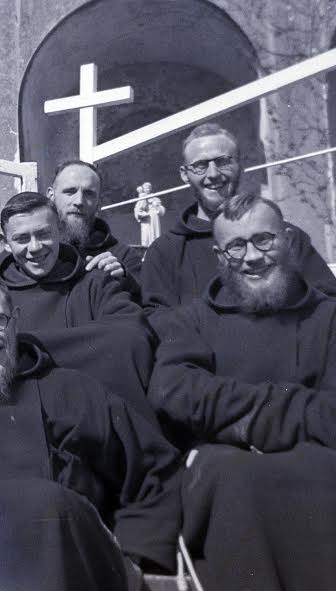 from left, Fr Eustas, Fr Mark and Fr Donatus (front right) pictured in Ards before they were ordained at the Ards old House.

The old negatives were developed in Lettereknny in the same chemist in Letterkenny which was then called “ L. McGee’s” instead of its present name Magees. And belonged to Mrs. Coyle Ballymacool Terrace and she paid all of two shillings to get the photographs developed.

Fr. Mark passed away in that same year in his beloved Ards and he didn’t get a chance to celebrate the annual feast of St Francis of Assi, which is at the start of this month October.

He departed as his order would have wished with none or very little personal belongings.

All Fr. Mark had was his memories of his friends that he met in the post office and in his vocation to the priesthood. Is was his letter that he kept for his offer of work at the post office in Letterkenny that brought memories back.

Paul Glackin was the postman who recently had the conversation about Cornelius Coyle’s letter for his job as Telegram Boy. Paul Glackin who is now a postman in Letterkenny for many years started his life in the post office the same way as Cornelius Coyle did. 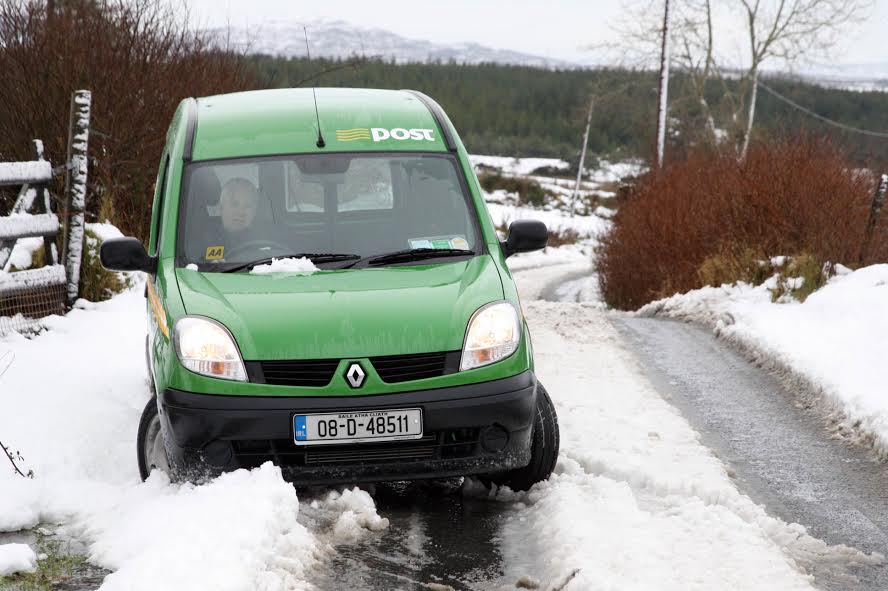 Paul Glackin who works as postman in Letterkenny, Paul also was the last person to hold the post of Telegram Boy in Letterkenny. Before the service was faded out. Photo Brian McDaid

Paul Glackin was the last person to be appointed as Telegram Boy in Letterkenny before the telegram service started to fade away.