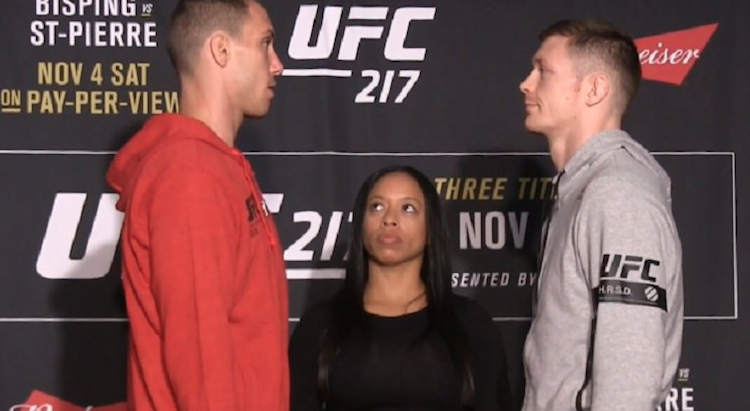 Joe Duffy believes tonight’s showdown with James Vick is the perfect chance to get into rankings and possible title territory.

The 29-year-old Burtonport man faces Vick at Madison Square Garden, on the UFC 217 undercard of the middleweight bout between Georges St-Pierre and Michael Bisping.

Duffy heads for the iconic Manhattan venue for the first time looking to make something of a statement in what is the first of a new seven-fight contract he penned in the summer.

“I felt like I wasn’t where I needed to be, but now I’m starting again to get to the point where I want to be,” Duffy said.

“I suppose I’m in my prime, I need to fight.

“I feel a bit of relief and excitement [after the last year] to compete now. It was just a case of I want to be active now.

“So I signed for seven fights and now there’s more chance of me being able to run through the fights. At least get three in a year. That’s kind of my goal.”

Duffy weight in at 154.4lbs for the bout with Vick tipping the scales at 155.2lbs

Duffy defeated Reza Madadi in his last fight in March and is 17-2 as a mixed martial artist.

He said: “I’m going in there with an open plan, I’ll chose the tool for the job once I’m in there. ‘You can base only bits on footage [of their previous fights], but you never really know what they’re going to do on the night.

“I try to concentrate on myself. I’ve got some things that I like to use and obviously I feel like my understanding of the game will work well on him, but mostly I don’t like to set things.”