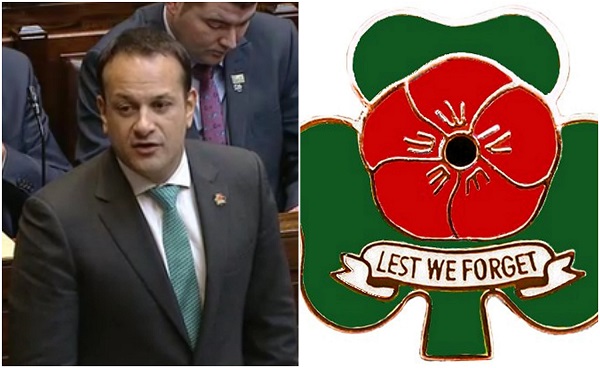 Over 200,000 Irish troops served in the British Army during World War One, although the true amount of people who served remains a mystery as official figures do not take into account Irish people who signed up as British. At least 35,000 Irish citizens perished during The Great War, which lasted between 1914 and 1918.

On the week of November 11th each year, the Poppy Appeal aims to commemorate British armed forces. To commemorate the Irish who died during World War One, a shamrock poppy is worn.

The symbol of the poppy however, is divisive, according to Senator MacLochlainn, as it serves to contribute to a binary ‘us’ and ‘them’ narrative.

Instead of wearing a shamrock poppy, he says there should be a unique symbol specifically for the commemoration of the Irish who died in WW1- which does not include a poppy.

In his previous role as Mayor of Buncrana, Senator MacLochlainn attended commemoration ceremonies in France and Belgium for the dead Irish alongside Unionist Mayors from across the border, with peace and reconciliation being at the heart of these trips.

Remembering both Unionists and Republicans who died during WW1 serves to unite both communities, but by wearing the poppy, Senator MacLochlainn says, Varadkar creates a schism.

“The poppy is a divisive symbol on the island of Ireland. It’s a mistake to conflate the memory of the thousands of soldiers with the poppy,” the Senator told Donegal Daily.

“The Royal British Legion’s Poppy Appeal is very clear in its message that it is to support the British armed forces who served and continue to serve. However, large amounts of nationalists can’t wear the poppy because of the British army, the same army who were responsible for executing the 1916 leaders, the horrors of the black and tans.

“There is unity on this issue of remembrance for both Unionists and Nationalists but to wear a poppy is to divide.

“These soldiers went to war in good faith but the poppy is the wrong way to commemorate them. Straight away you’ve alienated a large section of Irish society by wearing a poppy. It’s an offensive symbol.

“The remembrance of the Irish who died, both Unionist and Nationalist, is something that can unite us. But Varadkar has undermined this.”

“It’s not something the Taoiseach should wear”

As the Taoiseach, MacLochlainn says he should be mindful that he represents all people in Ireland – Republican and Unionist.

“I don’t have any objections to people who want to wear the poppy – but the Office of the Taoiseach is to represent everyone in society, much like the President, they need to think about what they do. It’s not something the Taoiseach should wear, it was very selfish and it was wrong.”

Senator MacLochlainn explains that it is different when individual TDs wear emblems such as Easter Lillies and Repeal jumpers as they do not represent Irish society; whereas the Office of the Taoiseach does.

“As the Taoiseach of Ireland he is the co-guarantor of the Good Friday Agreement – how can he say he is adhering to those conditions when he is wearing a poppy on his chest?

“I wear lilies, and Unionists wear poppies, some TDs wear Repeal jumpers, but the Taoiseach of the day is bigger than the person, so they must be careful. The same goes for the President.

“I have never seen Varadkar wearing an Easter Lily – and I’d assume he hasn’t worn one so as not to offend.”

Towards a common symbol

“No Irish Republican will ever wear a poppy, and I wouldn’t expect a Unionist to wear a lily.

“I wouldn’t wear one because the poppy is associated with crimes and horror; from the present day right back to hundreds of years ago and the havoc wreaked across the world.

Senator MacLochlainn says that Derry native James McClean’s refusal to wear the emblem is “admirable” given the history of his home city, despite him playing for a British football team.

“I salute James McClean as every year he takes a stand on this and that is deserving of huge admiration. Every year he refuses to wear one, and that takes a lot of courage. He comes from a city where people were killed in the streets by that army.”

Instead, Senator MacLochlainn says an alternative solution would be to come up with a new symbol to remember the Irish who died in World War One, a symbol which does not contain a poppy and its connotations.

“If he feels he needs to wear a symbol, we should come up with a new one, a different symbol. But that symbol is not the poppy and it never can be.

“We can remember and commemorate without offending,” he concluded.

Other TDs however, have supported Varadkar’s decision to wear the shamrock poppy.

Health Minister Simon Harris told the Irish Times that he supports Varadkar’s decision, saying “I say fair play to Leo for doing it.”