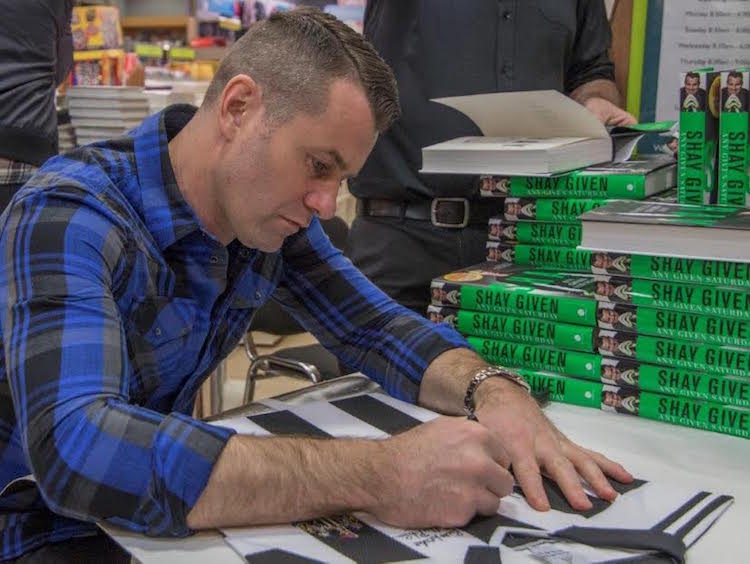 Shay Given reflects on the carnage, the celebrations and a World Cup circus

Shay Given can still seem them now, ‘these little grenade-type rockets’, as he describes the soundtrack to a night that ranks among his greatest.

With 100,000 Iranians baying down on him in the Azadi Stadium in Tehran and a place in the 2002 World Cup at stake, the fire hardly needed stoking.

For Given, that play-off is perhaps the stand-out personal moment from his 20 years and 134 caps in the Irish shirt.

“It was carnage out there,” the Lifford man says.

“Their fans were in five hours before the game.  There were 100,000 men – no women were allowed in. We got off the bus and they were just throwing stuff at us, rocks, fruit you name it.

“They were these little grenade-type rockets. One went off behind the goal and I was shook. Another one went off in front of me and the dirt hit me in the face. I was thinking: ‘F***, would you calm down a bit!’”

But the night is best remembered for Given’s heroics.

Given says: “That Iran game was one of my best Irish games. It gets brushed under the carpet because we won 2-0 at home.

“You make big saves sometimes in your career and I made one that night, from Karimi, down to my left-hand side.

“Had they scored, 2-1 would have been a completely different thing going out to 100,000 people in Iran.”

That stop from Ali Karimi, who gave Gary Breen the slip before getting a shot away, is Given’s top stop from all his Irish saves.

The then Newcastle United ‘keeper brilliantly got down to his left-hand side, turning away one-handed.

Earlier that night, Given denied Ali Daei and, late in the game, saved from both Karimi and Karim Bagheri.

Given’s heroics teed Ireland up for the second leg.

In Tehran, Given had to be at his best to keep out Karimi, Bagheri and Mehrdad Minavand, before finally being beaten in added time by Yahya Golmohammadi.

But Ireland had done enough and that late Iran goal made Given’s Man of the Match display in Dublin all the more vital. It meant Ireland had avoided making an exit on the away goals rule.

There was a strange sort of sight in the away dressing room in Iran.

Given says: “There is a no-alcohol law in Iran so we were spraying water around the changing rooms after it to celebrate. It was a fantastic feeling, knowing we were going to the finals.”

It was a somewhat different dressing room to that he experienced in 2009 in the Paris suburb of St Denis. Ireland were robbed by France as Thierry Henry’s now infamous handball set-up an extra time winner for William Gallas. 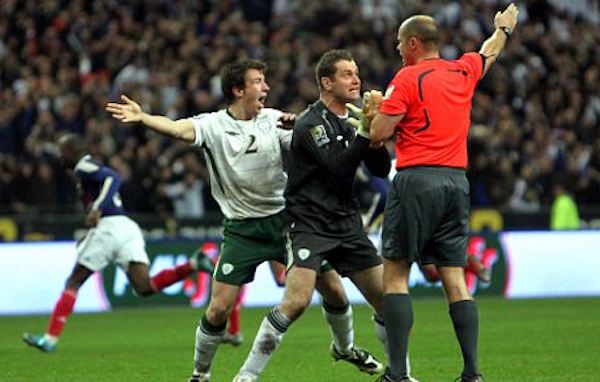 Given was livid then and you get the feeling that the passing of time hasn’t dulled the pain.

“It does rankle,” Given says.

“I met him a couple of times since when we’ve done media stuff, but we haven’t spoke. There’s an elephant in the room! I don’t know what thoughts he has, but we feel aggrieved by it.”

Given played in 1997 as Ireland were beaten by Belgium over two legs in a qualifying play-off for the 1998 World Cup in France and he was injured for the defeat by Turkey two years later.

But in 2002, Given finally got to grace the World Cup stage.

It was all that was good and bad about Irish football all rolled into the one epic, explosive and never-to-be-forgotten month.

Even before a ball was kicked, Ireland lost their captain, talisman and leader after Roy Keane went home following a row with manager Mick McCarthy in Saipan.

“We lost our captain and one of the best players ever to come out of Ireland,” Given says, 15 years on.

“It wasn’t just someone we could replace fairly handy. We did well, but there aren’t many Roy Keanes about! It’s all ifs and buts…it’s just a shame he wasn’t there.

“We had to park it to one side. We had to go and focus on playing for Ireland. It wasn’t good for anyone, but we had to get on with it.”

Ireland drew 1-1 with Cameroon in Niigata in their opening game and defeated Saudi Arabia 3-0 in Yokohama.

In between, Ireland were trailing Germany 1-0 in the dying moments of an Ibaraki night. Miroslav Klose had Germany in front and Ireland were beaten until, right at the death, Niall Quinn flicked a long ball onto the other Keane, Robbie, and he glided a shot past Oliver Khan. 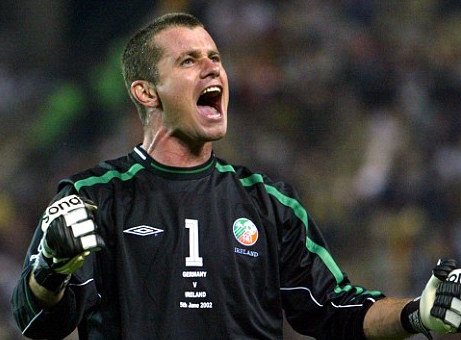 Before Given knew it, Keane was cartwheeling before the thousands of Irish fans and McCarthy was off on a jig on the touchline.

“I was celebrating on my own,” Given smiles.

“It was pandemonium down the other end.

“They all went to the corner and even the men on the bench were away down. We deserved it. Oliver Khan looked like he was unbeatable that night. It felt like a victory when we scored. It was a fantastic point.”

Against Spain, Ireland fell behind to a Fernando Morientes goal. When Ian Harte had a penalty saved by Iker Casillas and a succession of chances failed to yield a leveller, Ireland were on their way home.

Until, that was, Fernando Hierro fouled Quinn and Keane tucked home a penalty.

Ultimately, penalties would decide the night.

Matt Holland shot off the bar, David Connolly and Kevin Kilbane were denied by Casillas. While Juanfran and Valeron fired wide, Spain had the chance to win it with the final kick of the shoot-out. Given still winces at the memory of Gaizka Mendieta’s winning penalty, down the middle and just missing Given’s boot.

“We should have beaten Spain,” he grimaces.

“At the end of extra time they were hanging on for the draw. Since then, they’ve been World champions and European champions, it’s unreal to think we could have knocked them out.”

A week or so later, Ireland were given a massive welcome home party in Dublin, but one of Given’s abiding memory of that manic summer was when he crossed the bridge back into Lifford.

“It was mad to think how many people came to Lifford to welcome me home,” he says.

“I felt like the Pope coming into Lifford in the white car, waving to people and people touching me.

“The big thing for me in Donegal through the Jack Charlton era was when you were driving around Lifford beeping horns in the cars if you got a result – it was just as if we had won the World Cup! It was full circle from that to stepping onto the pitch at the World Cup finals. It was very special.”

Given has recently released his autobiography, Any Given Saturday, had for the first time has reflected on a career that touched three decades, a World Cup, two European Championships, countless saves and a treasure trove of memories.

“Mad isn’t it?” he wonders in a quiet corner of the Letterkenny Shopping Centre.

“Wembley, the San Siro, the Nou Camp…it’s amazing that a size five football full of air can be a passport to all these amazing stadiums. It’s amazing to think someone from Lifford could do that.”